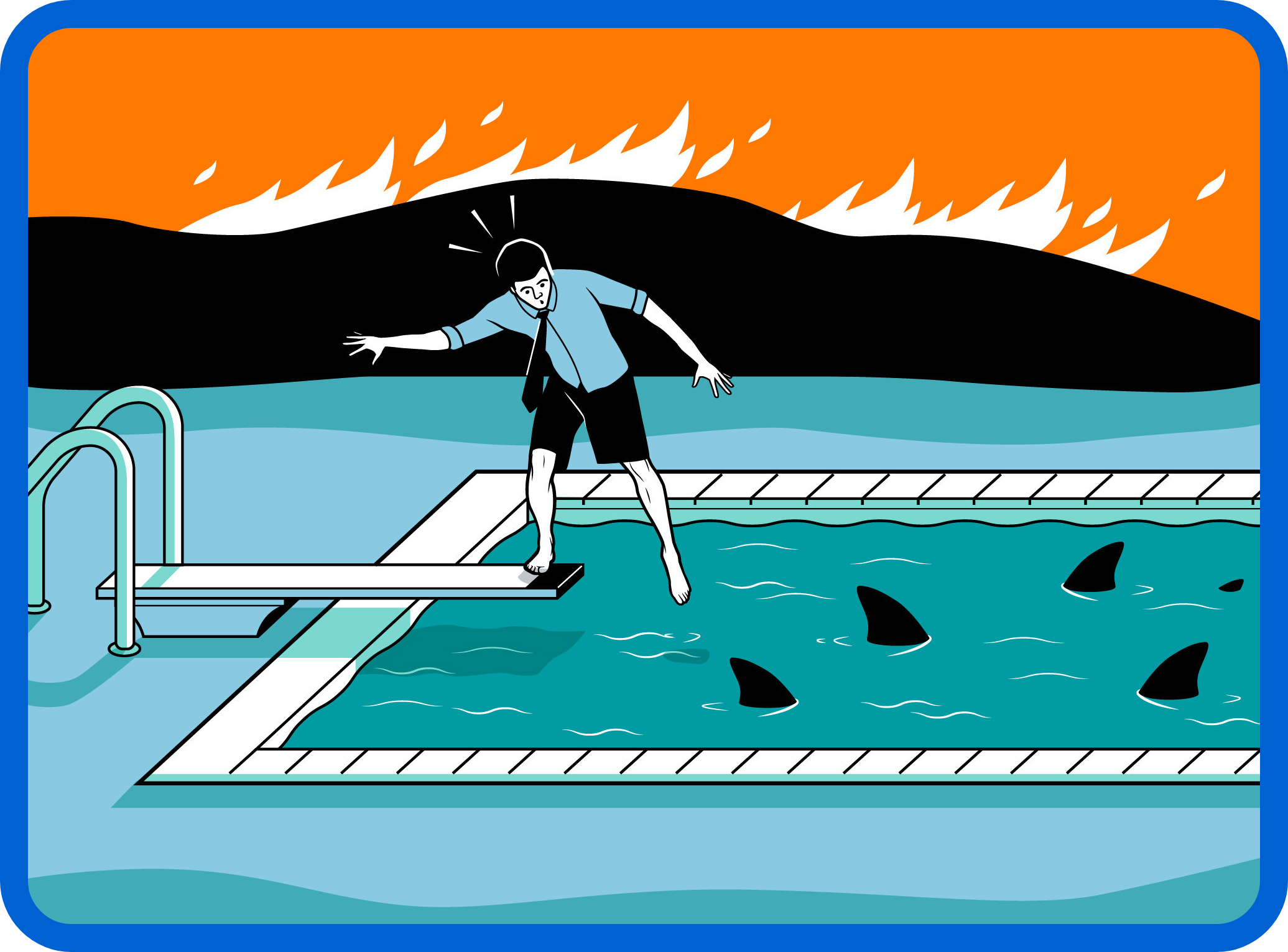 This past week was an eventful one for both investors and markets. The much-anticipated FOMC meeting on Tuesday and Wednesday resulted in the Fed preparing markets for a March move: The Fed is poised to raise rates for the first time since 2018, as well as end the expansion of its balance sheet.

The S&P remains down around -7.0% for the year. However, with its earnings expected to grow 8.4% in 2022, the backdrop for stocks appears to be a solid one.

Apple (AAPL) had its biggest quarter ever. However, reactive investors have punished companies such as Netflix (NFLX), JPMorgan (JPM) and Tesla (TSLA), adding to the uneasy mood in the market. Meanwhile, all eyes are on the other anticipated reports this week, which include heavyweights like Alphabet (GOOGL) and Amazon (AMZN).

Investors could use the current fall to buy into fundamentally strong index stocks as most of the technology and the banking stocks (large caps) have seen significant correction in the recent fall with stocks correcting anywhere between 10%-30% YTD 2022 and look attractive at current valuation levels.

While growth sectors, like technology and discretionary, may have sold off more heavily this year so far, opportunities could be emerging in this space.

While it’s prudent to err on the side of caution with higher-valuation parts of this market, quality areas with proven business models and positive cash flows, and those that are levered to long-term themes, including enterprise spending (hardware and software), supply-chain resolution (in areas like semiconductors), and mobile payments (driven by ongoing consumer demand), are reckoned to be stronger bets.

After a volatile week, the market did deliver a solid rally on Friday afternoon.

Apple has its juiciest quarter ever

Apple just had its most massive quarter of sales ever. Despite supply challenges, the world’s most valuable brand’s sales jumped 11% last quarter to $124 billion – beating expectations. Its shares spiked 5% as Tim Cook reassured investors with the news that supply issues were easing.

Apple’s sales grew across every product line except iPads. iPhone sales, which make up more than half of Apple’s total, jumped by 9% as people upgraded to new 5G models.

Macs saw the strongest sales growth of any Apple hardware, thanks to new $2K Pro models featuring faster Apple-made chips instead of Intel ones.

With its alleged $275 billion deal with Chinese officials, Apple did what other Big Techs from the U.S. couldn’t.

The supposed goal was to establish strong ties with China to protect and grow Apple’s business in the key market, where nearly all its products are assembled.

Thanks to Cook’s reported diplomacy efforts, Apple is thriving in China, and how! It is one of the few U.S. tech companies succeeding in the world’s most populous country. iPhones now account for nearly a quarter of phones in China.

What’s most impressive is that while total smartphone sales in China fell by 9% on shortages and sluggish spending, iPhone sales grew impressively by 32%.

However, not everyone is bullish about Apple stock, with some experts recommending that investors wait for a dip in the stock’s value.

GM accelerates towards a $7 billion bet on EVs

General Motors (GM) is set to invest a historic $7 billion in 4 facilities across Michigan and create 4,000 jobs in the process as it makes a big bet on EV production. The move is set to make the state “the hub” of electric vehicle development and manufacturing.

As part of Tuesday’s announcement, GM said Orion Assembly, along with Factory ZERO in Detroit and Hamtramck, will manufacture the 2024 Silverado EV and GMC Sierra EV pickups.

GM also said it is working to build a new, more reliable supply chain through strategic supplier agreements for batteries and EV components. It is expected to be scalable, more resilient, more sustainable and more North American-focused. Global supply chain issues have hampered GM and other automakers throughout the pandemic.

GM stands to save tens of millions of dollars by integrating its battery assembly into its EV production and converting existing assembly plants.

The company aims to have more than 1 million units of EV capacity in North America by the end of 2025 and to convert half of its North American assembly capacity to EV production by 2030.

One of the world’s largest automakers, General Motors led the U.S. market share with 17.1% of the industry’s total sales in 2020. However, Toyota has overtaken the company as the top-selling automaker in the USA in 2021.

General Motors’ U.S. sales came in at 440,745 vehicles in the fourth quarter, down 43% and 1.4% on a yearly and sequential basis, respectively. This was due to limited vehicle supply amid chip crunch, which couldn’t keep pace with the mounting vehicle demand. Nevertheless, high average prices of vehicles amid tight inventories are anticipated to have aided Q4 revenues.

The company is slated to release fourth-quarter 2021 results on Feb 1, after market close.

Valuation metrics show that GM may be undervalued – indicating that it would be a good pick for value investors. The financial health and growth prospects of the company demonstrate its potential to outperform the market. Recent price changes and earnings estimate revisions indicate this stock lacks momentum and would be a lacklustre choice for momentum investors.

Intel to build the world’s largest chip manufacturing plant in the U.S.

The chipmaker is set to invest up to $100 billion to build what is potentially the world’s largest chip-making complex in Ohio, as it looks to boost capacity as a global shortage of semiconductors affects everything from smartphones to cars.

The move is part of CEO Pat Gelsinger’s strategy to restore Intel’s dominance in chip making and reduce America’s reliance on Asian manufacturing hubs, which have a tight hold on the market.

The complex, which the company hopes will be operational in 2025, is expected to include two semiconductor fabrication plants for Intel to research, develop, and manufacture computer chips.

Intel ceded the No. 1 semiconductor vendor spot to Samsung in 2021, dropping to second with growth of just 0.5%, the lowest rate in the top 25, data from Gartner showed.

Sure, Intel has taken a beating from rivals, but it’s still standing tall in a $425 billion industry. CEO Pat Gelsinger has a clear roadmap to regain share, including a new foundry service.

As part of its turnaround plan to become a major manufacturer of chips for outside customers, Intel broke ground on two factories in Arizona in September. The $20 billion plants will bring the total number of Intel factories at its campus in the Phoenix suburb of Chandler to six.

For 2022, Intel has a health roadmap of new products. In the first quarter, it has launched its new 12th-generation processors and has also begun to ship Alchemist, its line of discrete graphics products.

However,  Intel reported year-over-year (YOY) growth of only 3% for its fourth-quarter revenue, even though the semiconductor market continues to boom. Still, I don’t believe it’s all bad for the company.

Still, it’s all bad for the company.

Non-GAAP revenue for the quarter was $19.5 billion, up low single digits YOY. Regardless, this beat Intel’s prior guidance by over $1.2 billion, driven by a solid recovery of its data centre market. For the quarter, the data centre segment grew over 20% YOY.

Intel’s consistent free cash flow funds a growing dividend to shareholders. The dividend per share has increased 32% over the last five years to a current quarterly payment of $0.3475 per share. That brings the dividend yield to 2.6%, more than twice the yield of the S&P 500 index. Plus, Intel only pays out 32% of its free cash flow in dividends, providing ample room to continue increasing it.