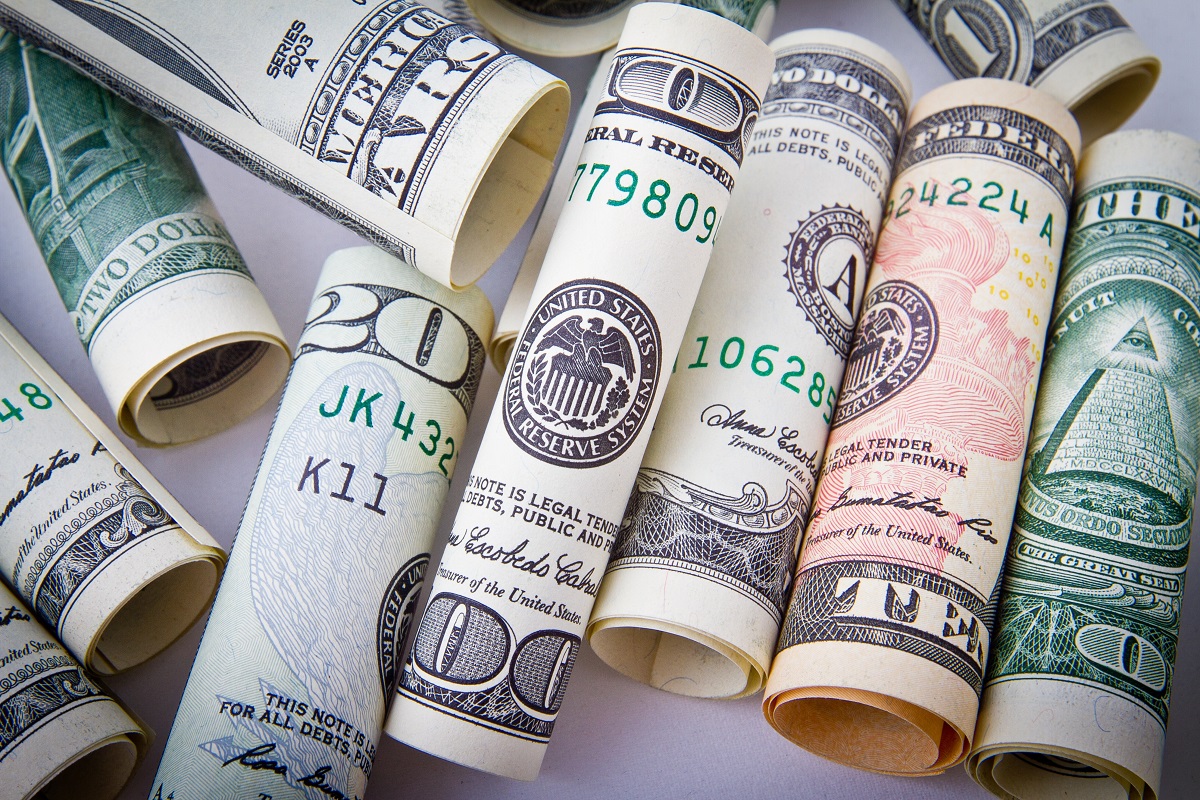 Have you been interested in US market trading from India? For markets, one economic announcement overshadowed the American midterm elections. Once October core CPI climbed less than anticipated, stocks jumped the next week, fueling market expectations that the Federal Reserve may soon pause raising interest rates. While the core inflation rate and wage growth are still being driven by labour shortages, goods inflation is moderating as it should. As a result, the Fed may still be on a course to over-tighten monetary policy and induce a recession.

Earnings Expected to Deteriorate Going Into 2023 While Price Has Rebounded

If you are looking into US market trading from India, it could be a good idea to look into current market estimates. Equities have gone down over 20% this year. There have been expectations that the Fed will soon halt the quickest rate hike cycle since the 1980s, allowing the economy to enjoy a soft landing and escape a recession. However, as the Fed continues tightening policy, these aspirations could be shattered. As someone who wants to trade in US stocks from India, note that stocks are mostly further from pricing in the recession – and profit downgrades – with the S&P 500 up 13% from its October low.

Estimates for earnings are expected to decline much more. As opposed to the estimated 10% rise at the beginning of 2022, the average forecasts earnings growth of only over 4% in 2023. Without the oil industry, yearly earnings growth for the third quarter would already be negative, according to Refinitiv statistics. 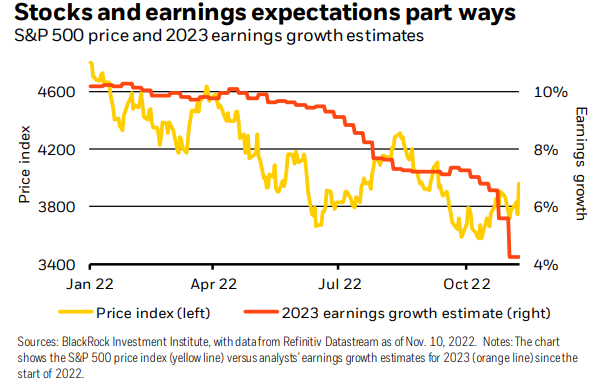 It is encouraging for those looking into US market trading from India that core CPI inflation, which excludes energy prices and volatile food, is rising moderately, considerably due to declining core goods inflation. After the epidemic, when consumer spending sharply shifted away from services and toward products, this was anticipated to happen eventually as spending patterns returned to normal. This is what caused the initial spike in goods inflation. However, spending is beginning to shift back to services, reducing the commodity shortage. Therefore, it’s anticipated that the lowering of goods inflation will persist. Given that many workers retired during the pandemic, this situation might not improve.

As the proportion of the population over 65 rises in the future decades, the labour pool in the United States is becoming smaller. According to our analysis, the Fed can only attempt to quickly reduce core inflation and wage rates to its target of 2% by severely depressing demand. It’s anticipated that the Fed won’t stop raising rates abruptly until the economy has entered a recession and is suffering. There doesn’t seem to be a chance for a soft landing.

However, it only needed one negative CPI surprise—one data release, not a trend—to rekindle optimism that the Fed would soon stop raising interest rates and that a soft landing was still possible. That made the market rapidly forget about the U.S. midterm elections. This serves as a helpful reminder that one should not be startled by unexpected data in this current environment of heightened macro and market volatility. The Fed’s “whatever it takes” strategy is pushing down inflation.

Following the lower-than-expected 0.3% increase in the core October CPI, U.S. markets soared, and Treasury yields dropped precipitously. Even while it doesn’t yet alter the overall picture, experts believe this is finally a promising trend towards inflation. Prices for essential commodities dropped. However, inflation for core services is still stubborn. It is not thought that a single data point will alter the Federal Reserve’s course toward over-tightening policy; rather, more persistent evidence of core inflation decreasing is required. 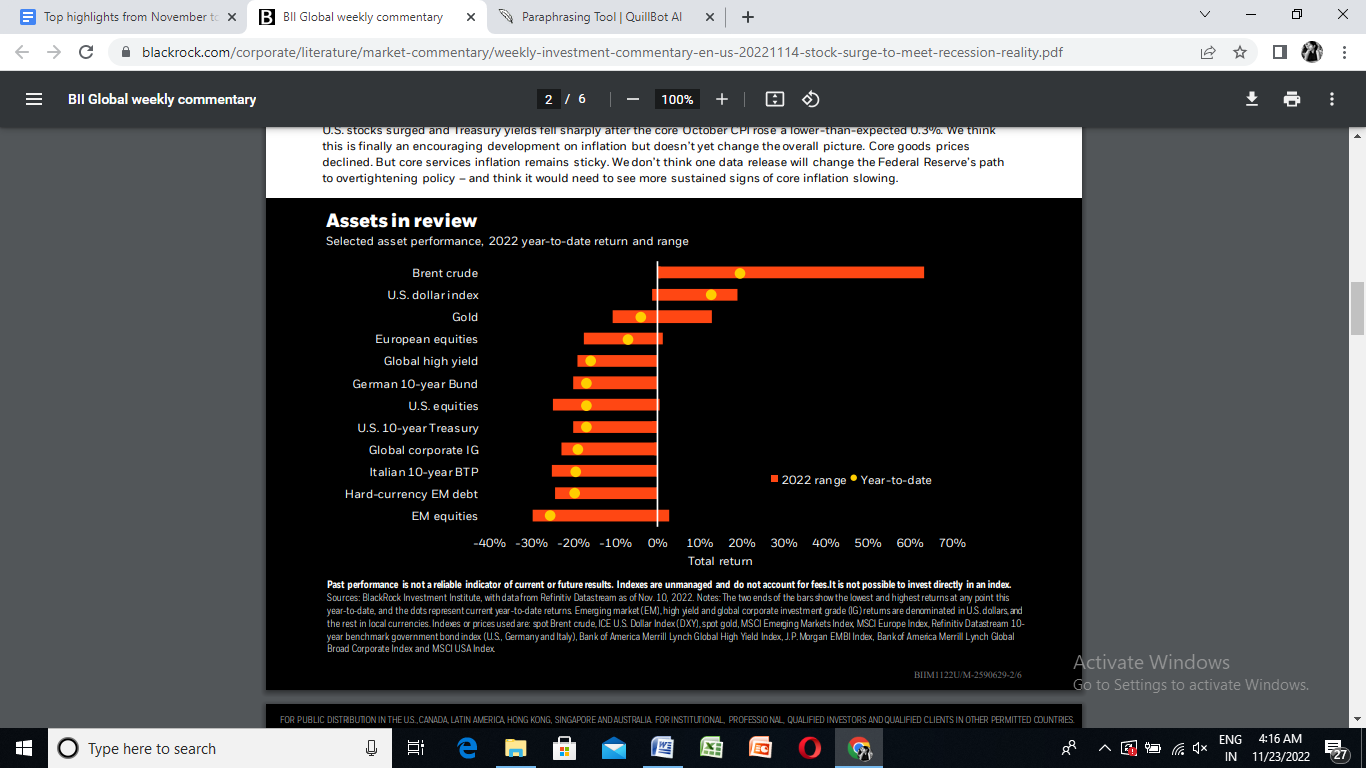 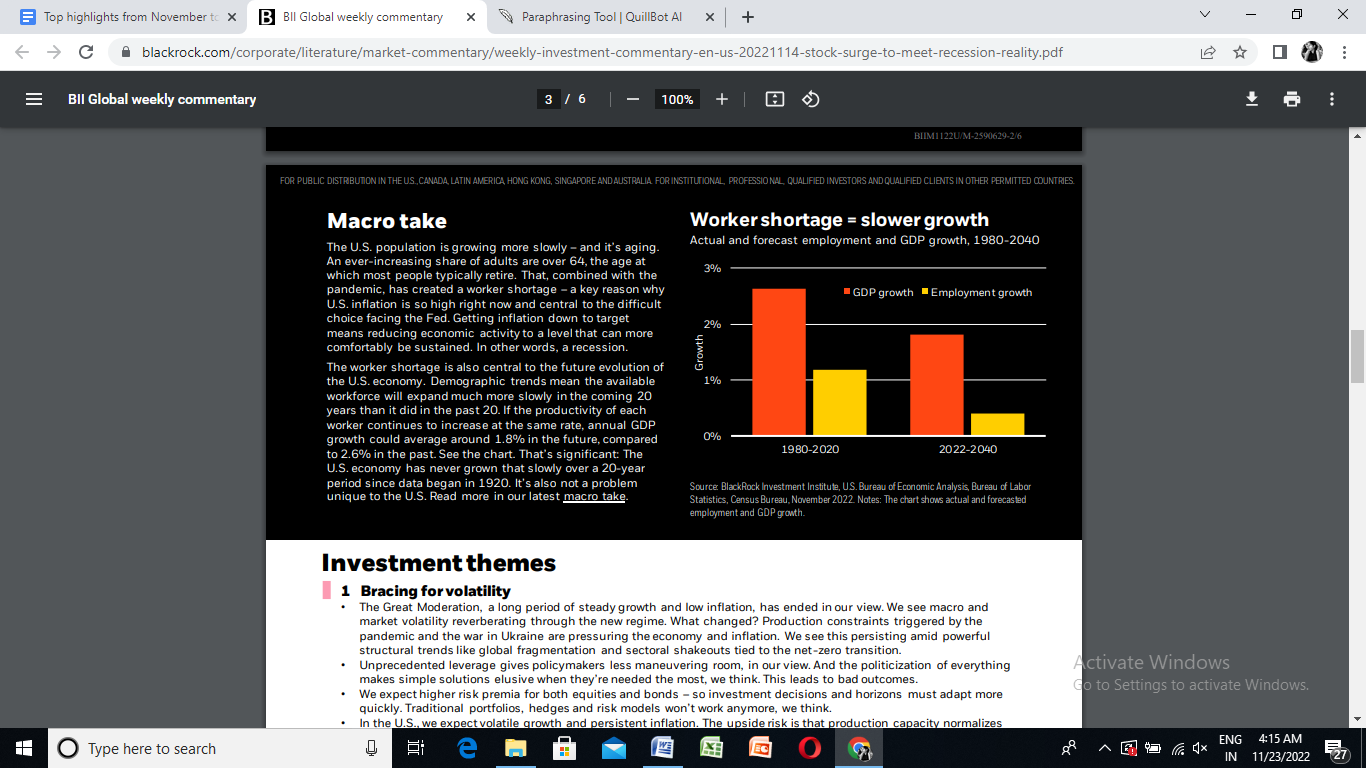 The population of the United States is aging and rising more slowly. The age at which the majority of individuals generally retire, 64, is being reached by an increasing percentage of adults. This, together with the pandemic, has led to a labor shortage, which is a significant factor in the current high level of inflation in the United States and is at the heart of the Fed’s challenging decision. Lowering economic activity to the degree that it can be more sustainably maintained is necessary to bring inflation down to the desired level. The future development of the American economy will be heavily influenced by the labor shortage. Due to demographic trends, the available labor will grow considerably more slowly over the next 20 years than it did over the previous 20. As a result, annual GDP growth might average approximately 1.8% in the future, as opposed to 2.6% in the past, if worker productivity grows at the same rate.

The plan for the Federal Reserve, Bank of England, and European Central Bank is to continue front-loading tightening. Assertively slowing down, they plan to stop hiking sometime in the next year. The magnitude of rate increases will start to be limited by central banks. In the end, the destination counts more than the rate of growth. Despite all the optimistic predictions of a policy shift, Jay Powell maintained during the Fed policy meeting in November 2022 that peak policy rates remain higher. 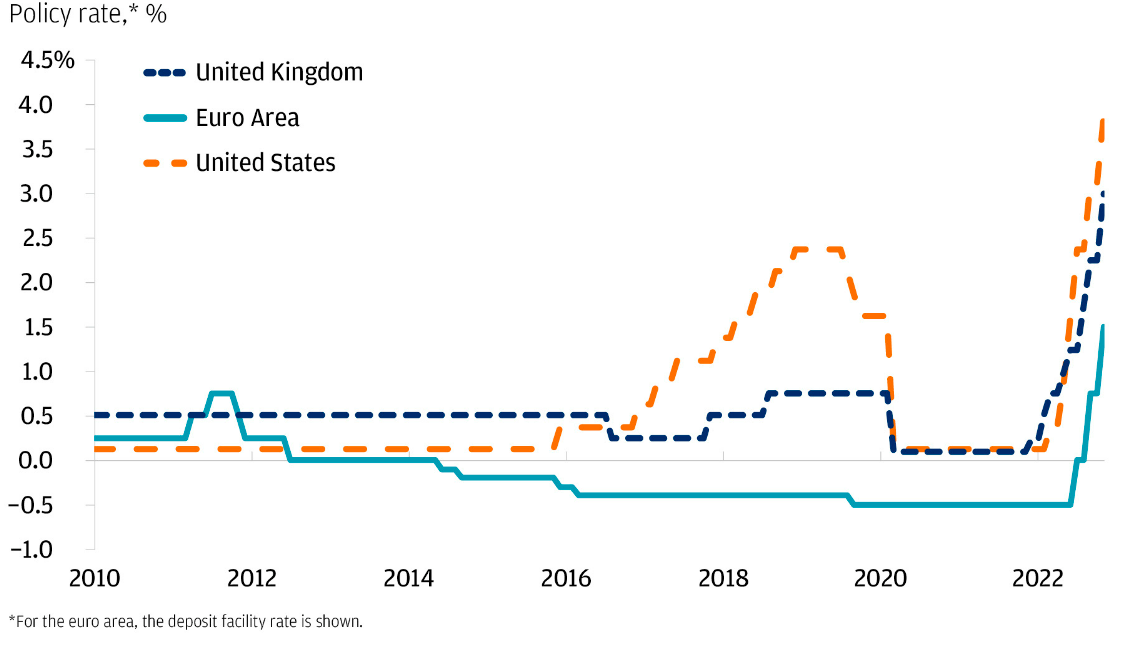 Jay Powell has stated time and time again that the Fed will “stay at it” until the task of battling inflation is completed. He keeps expressing his inner Paul Volcker. A lag exists in monetary policy action. First, the financial environment is becoming tighter. A downturn in economic activity follows that. Finally, inflation will start to decline. However, it may be too early for central bankers to discuss a switch to lowering policy rates.

Since governments have less time to achieve their net-zero goals, investors must begin adjusting their portfolios now. Climate risk is an investment risk. The net-zero journey is a now-story and a story set in the year 2050. The shift will be accelerated in the medium term by a worldwide push for greater energy security, particularly in Europe. The transition has not yet been properly priced into the markets. Markets are likely to value the assets of businesses that are better prepared for the shift more highly over time compared to other businesses. By investing in carbon-intensive businesses that have sound transition plans or that provide materials essential to the shift, investors can gain exposure to the shift in addition to “already green” businesses.

The COP27 meeting, which took place in November, produced a historic agreement on finance to assist vulnerable countries in dealing with the catastrophic effects of global warming. The aspirational target of keeping global warming to 1.5 degrees Celsius above pre-industrial levels was maintained in a final COP27 declaration covering the wide range of global activities to combat a warming planet. While repeating earlier recommendations to speed up efforts toward the phasedown of unabated coal power and phaseout of wasteful fossil fuel subsidies, it also emphasised renewable energy for the first time.

It didn’t go very far beyond a similar decision adopted at the COP26 summit in Glasgow the previous year on critical issues about lowering pollution that contributes to global warming. The agreement on loss and damage, which had barely made it onto the agenda for negotiations, gained significant impetus during the discussions. Developing countries fought for the fund tenaciously, eventually winning the support of wealthier polluters who had previously been wary of open-ended liability.

Profit Margins, Which are Elevated as of Now, May Normalize Going Ahead 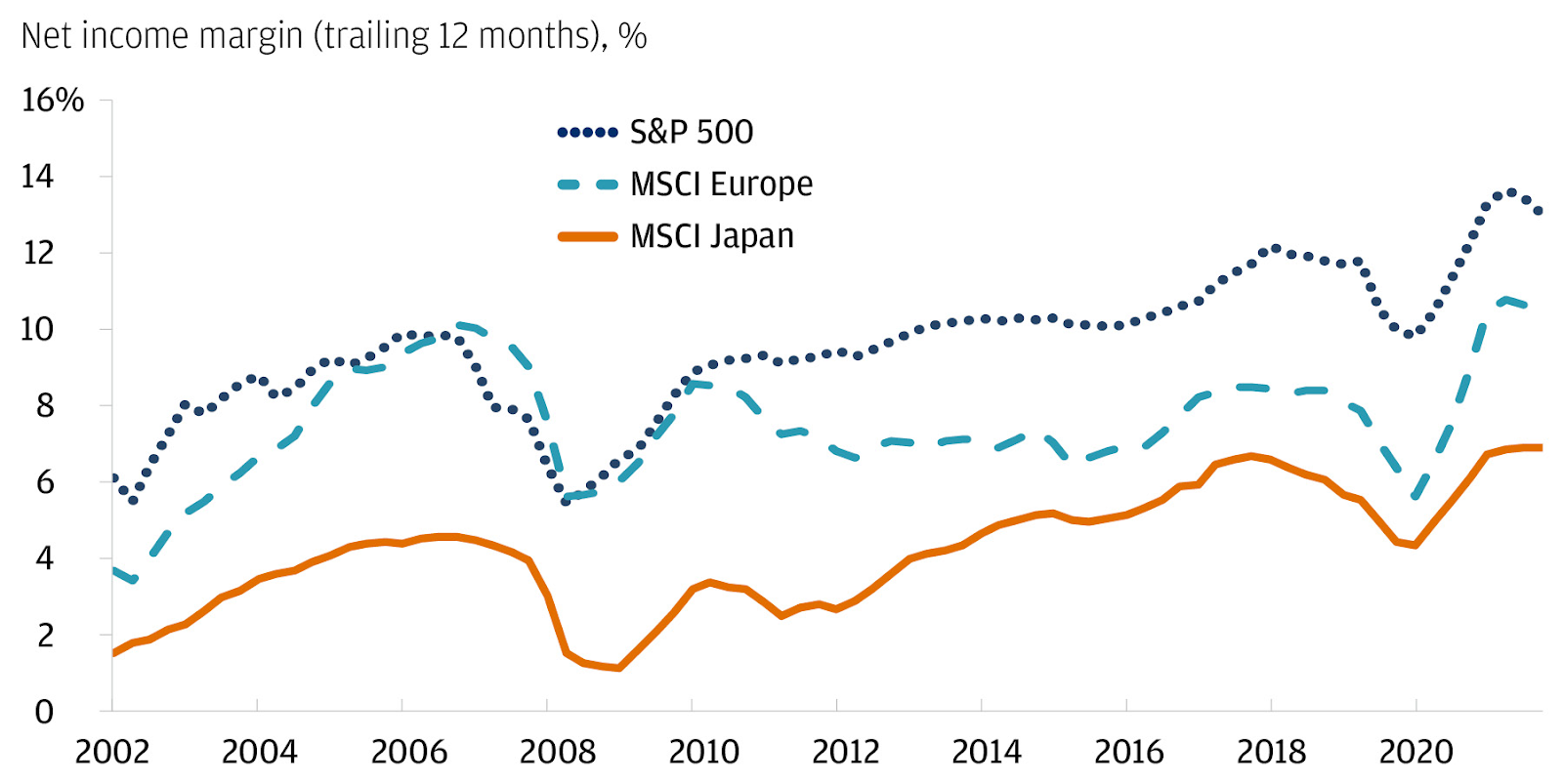 Investors figuring out how to trade in US stock market from India have not given up on the markets. However, a growing worry may enter the market narrative if risk assets finally recover from the wild ride we’ve been on over the past few years. If equity market levels for December 2019 are crossed, the pandemic stimulus-driven outperformance will rewind. Investors will need time to comprehend that on an emotional level. Despite bad press coverage and significant declines in the most prominent technological companies, the equities market has been relatively well maintained. For the S&P, a broad trading range has persisted. With an upside of around 4000, the downside has stuck at 3500. The market could reach a new low if inflation continues to climb unexpectedly. We can only hope that the market low is over.

In addition to direct stock investments, Stockal may offer some exciting options for stocks and ETFs, such as Brookfield Renewable Partners LP and NextEra Energy Inc,  if you want to position your portfolio towards the Net Zero theme. Furthermore, if you are interested in finding out how to trade in the US stock market from India, Stockal could be the right platform to head to.