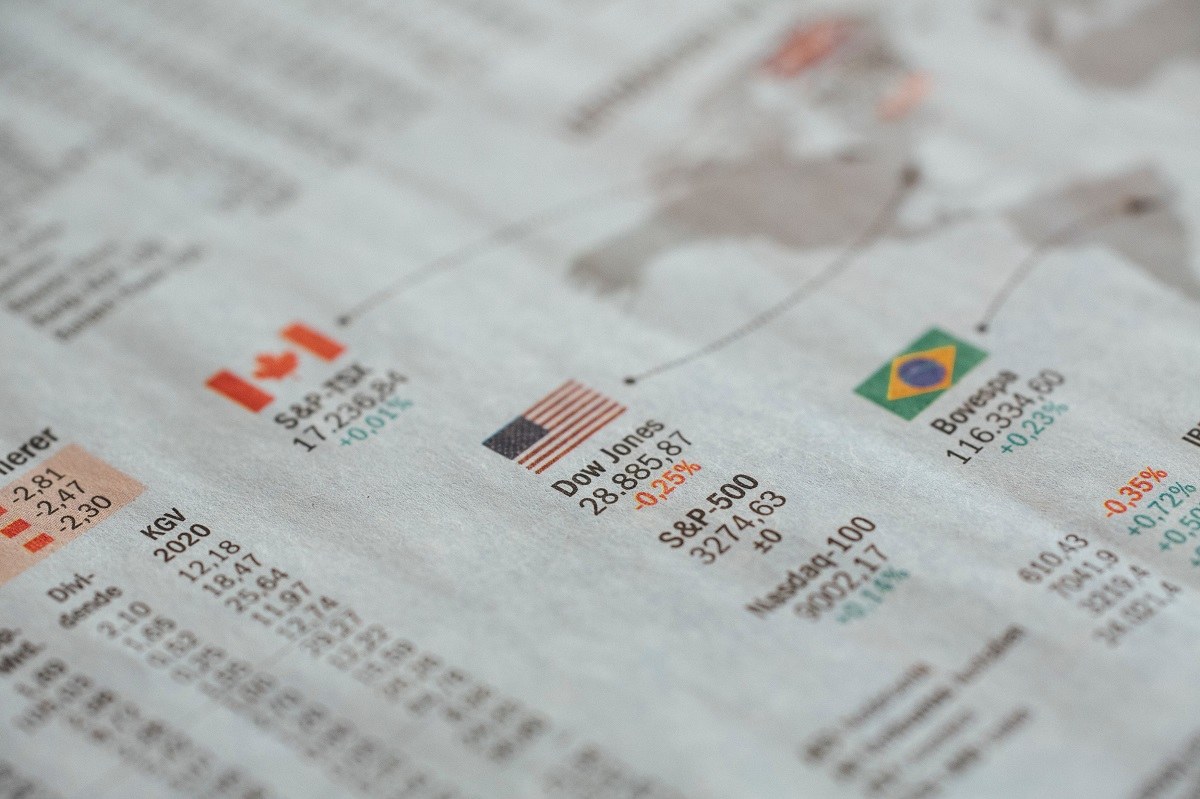 The S&P 500 experienced its worst first six months to a calendar year in 52 years due to a bear market. Investors headed into the year’s second half fearing that aggressive monetary tightening by the Federal Reserve and other major central banks could send the economy into recession. According to Dow Jones Market Data, the S&P 500 has had a year-to-date decrease of 20.6%, the worst first-half decline since a plunge of 21.1% in 1970. In addition, the index’s first closing price earlier this month was more than 20% below that early January peak, signifying the conclusion of the current bull market and the beginning of a bear.

Additionally, unprecedented first-half drops have occurred for several significant indices. In its lowest first half since a 23.2% decline in 1962, the Dow Jones Industrial Average dropped 15.3%. The tech-heavy NASDAQ Composite saw its most significant half-year decline ever, falling more than 29%.

Investments come with risk. Given that they have personally experienced the ups and downs and all the volatility in between, every investor who has invested in the stock market for more than five years is aware of this. But why would you want to put up with all that uncertainty? First, we anticipate that markets will increase with time, and historically, this has been the case. This graph, which depicts the expansion of the US stock market since the Great Depression, reveals the long-term tendency. 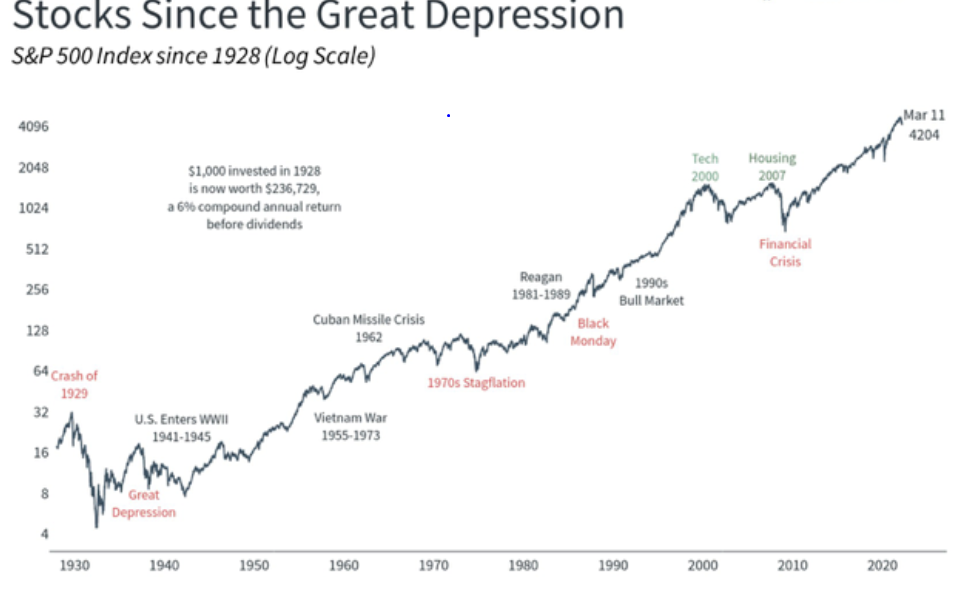 Nevertheless, history has provided many reasons to steer clear of stock market investments, and there is no assurance that markets will continue to rise in the future. It is difficult to remain invested over the long run through several recessions, including the 1929 financial crisis, World War II, the 1970s stagflation, and the 2008 financial crisis.

Despite all the stock market declines and corrections, if you had put $100 into the S&P 500 at the start of 1926, you would have around $1,264,161 by the end of 2021 if you had reinvested all dividends. Witnessing this growing tendency is impressive. Markets do, however, change with time. The market volatility may be a bit unsettling, even for seasoned investors, since you never know how far it can fall or how long it would take to recover.

How Long Does A Stock Market Correction Last?

Since they are less violent than crashes, corrections are attributed to a gentler label. However, it doesn’t imply you won’t experience them. Since World War II, there have been 24 stock market corrections, with a 14.3% average decline in the market, which may be unpleasant. This one has already passed 24%, i.e., more than the average. Corrections are not just less severe than crashes but also more gradual. A correction typically takes five months to reach its “bottom.” 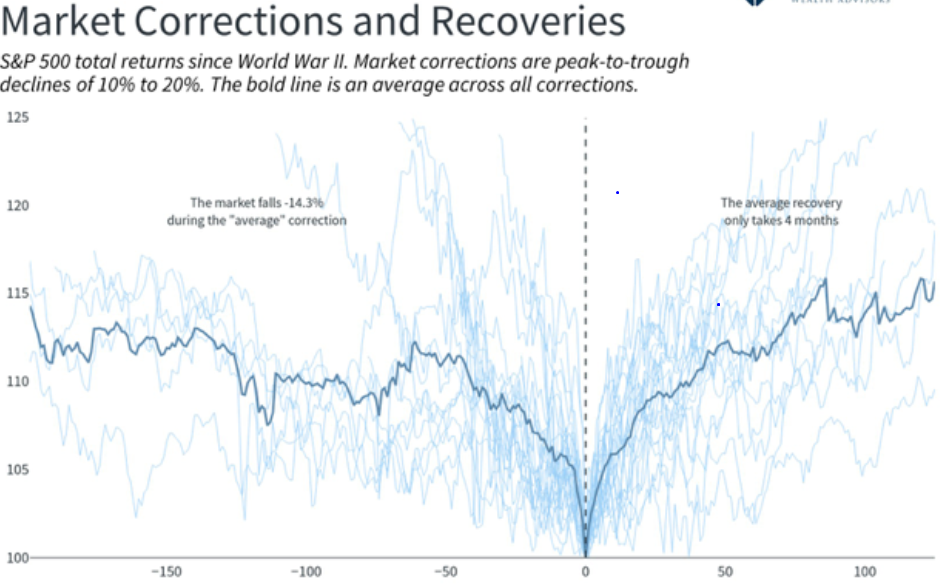 However, the market may swiftly rebound once it begins to shift. Just four months are needed for a correction to recover on average! Due to this, investors with genuinely diverse portfolios may think about continuing to invest over time. However, getting out might result in missing the ensuing rebound, which would be disastrous for your portfolio.

How Should Investors Calibrate Their Investing Strategies During Downturns?

Volatility spikes in the market are problematic but common aspects of long-term investment. You should prepare for market drops throughout your investment career; they are not enjoyable. But when the market is falling, it’s challenging to remain calm. So shouldn’t I be doing anything, you find yourself asking? Although each investment is unique, the following are some things to consider.

You may implement protective measures, such as stop orders and stop-limit orders, to safeguard an unrealized gain or restrict possible losses on an existing position. These may assist in making your decision-making more automatic and less dependent on impulses under pressure.

Risk tolerance is something that can and should be taken into consideration at any given time. Do you have sufficient funds to achieve the goals that you have set for the near term? You should invest money that you will need shortly or simply cannot afford to lose in relatively stable assets such as certificates of deposit, money market funds, or Treasury bills.

People often confuse the differences between terms like “the Dow” and “NASDAQ” by using them in the same context. Here, we compare the NASDAQ index vs. Dow Jones.

How To Invest In Dow Jones From India?

Here are your alternatives if you’re wondering how to invest in Dow Jones from India. You may invest using apps like Stockal, which makes owning US stocks incredibly straightforward. Additionally, you may create an account with any domestic brokerage firm to engage in foreign trading. Residents of India could also consider opening trading accounts with a foreign stockbroking company.

Exchange Traded Funds are another way for Indian investors to begin investing in Dow Jones. ETFs are collections of several stocks and bonds that trade as one fund. Tesla, Alphabet, and Amazon are some equities often traded on Stockal.

Many individuals are concerned that a recession is imminent since inflation is rising. Of course, nobody can predict when or if we will have a recession, but it doesn’t hurt to start putting plans in place just in case. It may be tempting to put off investing in Dow Jones if a recession is on the horizon. But since stock prices are often substantially lower during economic downturns, it might be one of the ideal times to increase your investments.

You should try your best to make the appropriate investing decisions. Not all equities will survive a recession, and causing incorrect investments might lose you money. To become an early adopter of this wealth creation regimen through Dow Jones investing, sign up with Stockal now.