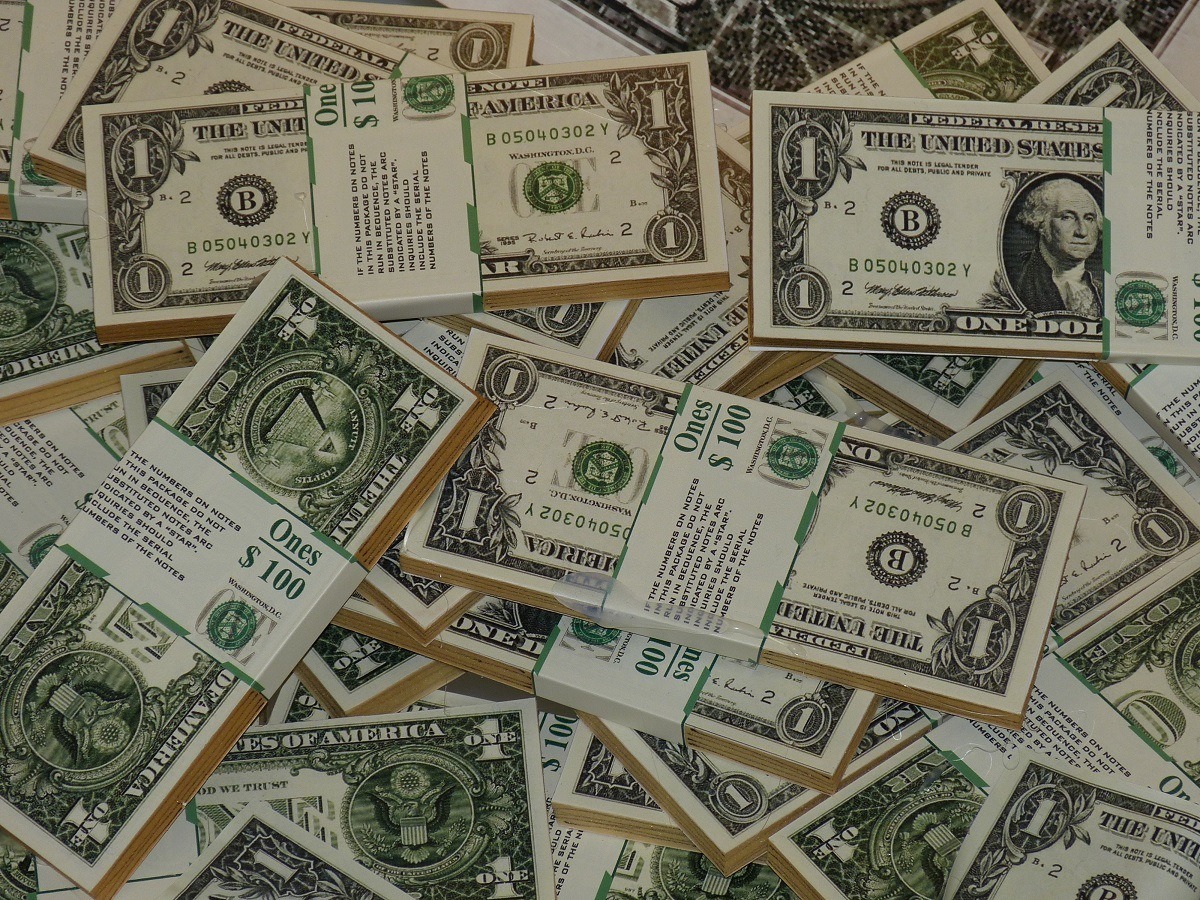 Q3 Expectations Were Not Sky High

As the third quarter earnings season began on Wall Street in October, investors were prepared for what may be the worst reporting season in two years. Analysts anticipated the S&P 500’s profits growth rate would be 2.9%, which, if accurate, would be the weakest year-over-year rise since Q3 2020. In addition, revenue growth forecasts of just 8.7% year on year are particularly concerning since if they are met, it would be the first time since Q4 2020 that the index has seen annualised revenue growth of less than 10%.

Markets started the reporting season on a shaky note, with US equities on course to have one of their worst years in recent history, amid fears that the Federal Reserve’s aggressive rate rises could lead to a recession. The S&P 500 is down 21.4% year to date (30th September, 2022) and is around 23% lower than its January 3 record closing. Meanwhile, the NASDAQ, which entered a bear market earlier this year, is down 29.2% year to date and 31.7% from its record high set on Nov 19, 2021. The Dow is down 17.6% this year and 19% from its all-time high set at the start of the year as on 30th September, 2022.

Earnings were predicted to fall for at least two-thirds of the S&P 500 in the third quarter. Consumers and companies are spending less due to increasing interest rates and growing inflation. While the US and worldwide economies are now avoiding recession, recent pessimistic economic data shows that the worst is yet to come.

Earnings forecasts fell 6.6% between June 30 and September 29. The typical quarterly decrease is roughly 2.3%, indicating that experts are still pessimistic about profits this quarter. Only the oil sector had profit expectations climb by 7.9% during the quarter, while the materials, communications services, and consumer discretionary sectors saw double-digit drops. 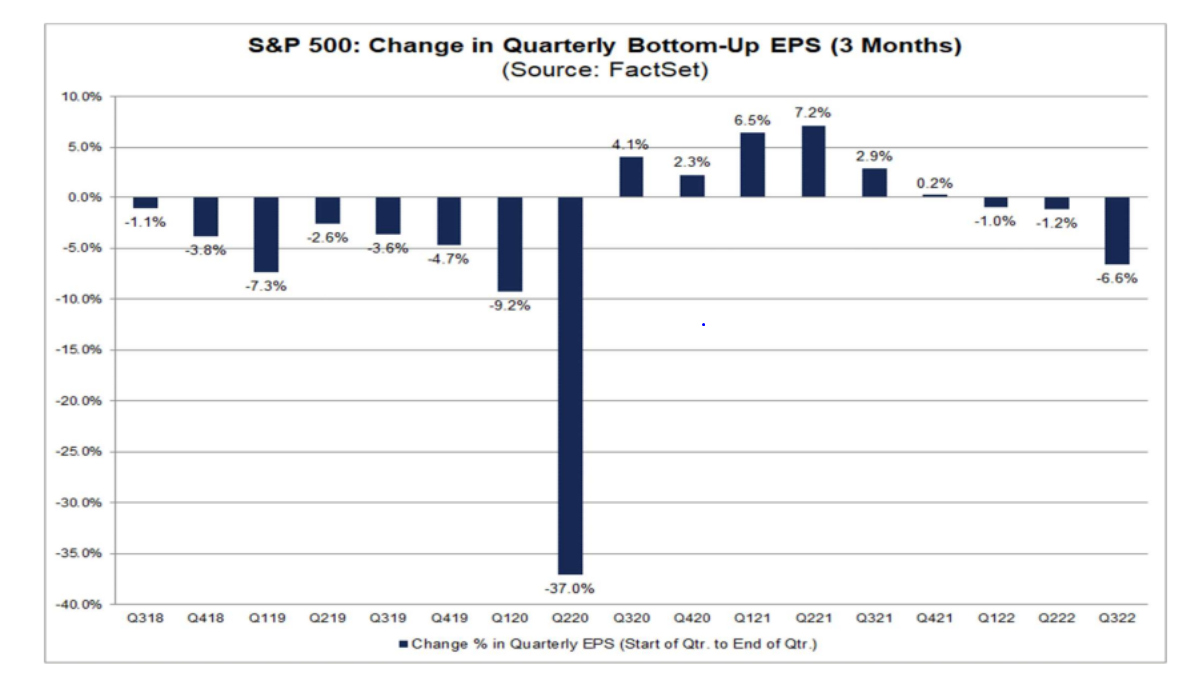 US Stocks Potential For More Decline To Tumble

On January 4, the S&P 500 set a new high of 4817. Since then, it has dropped by 20%, reaching a low of less than 3600 towards the end of September. While the index has now recovered, it seems this will be overturned in due time. Earnings and earnings expectations are expected to fall further. 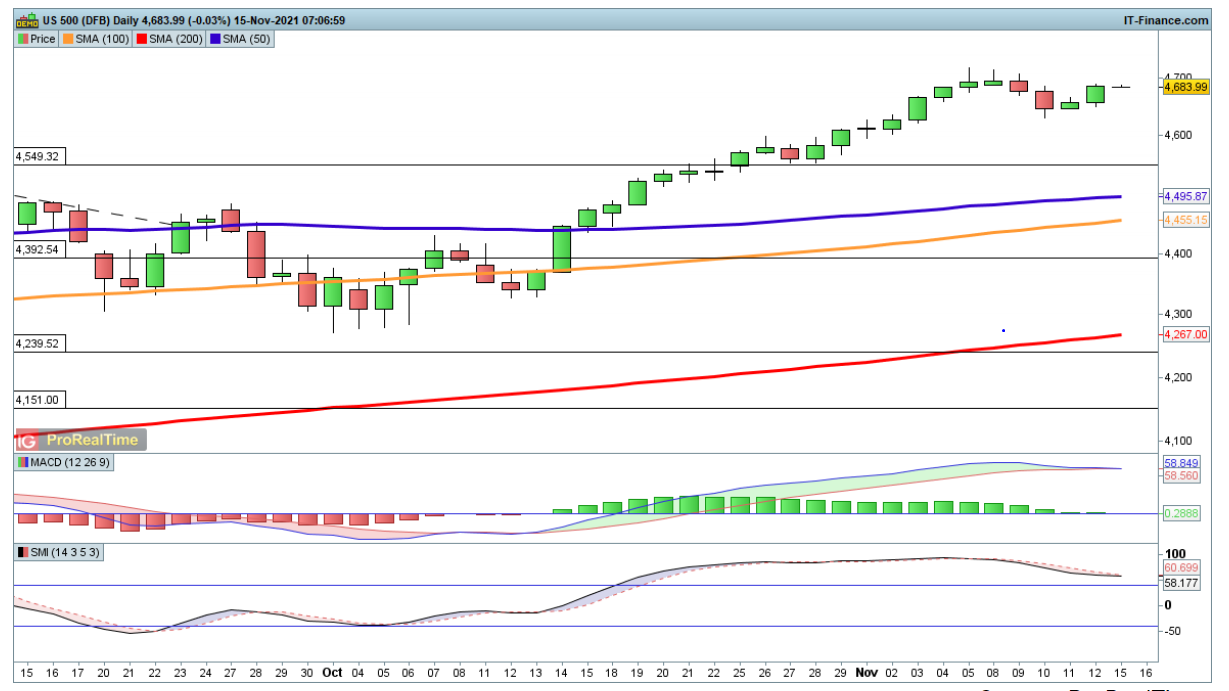 It’s All About Direction

Given the risky mix of increasing interest rates, intensifying recession fears, and sky-high inflation, investors will be paying careful attention to statements on forward guidance and revised outlooks for the months ahead. The strength of the US dollar is considerable, creating significant headwinds for firms with foreign revenue exposure, particularly those in the information technology and materials sectors. Other important matters that are expected to be raised include supply chain concerns, the health of the US consumer, and future employment plans. 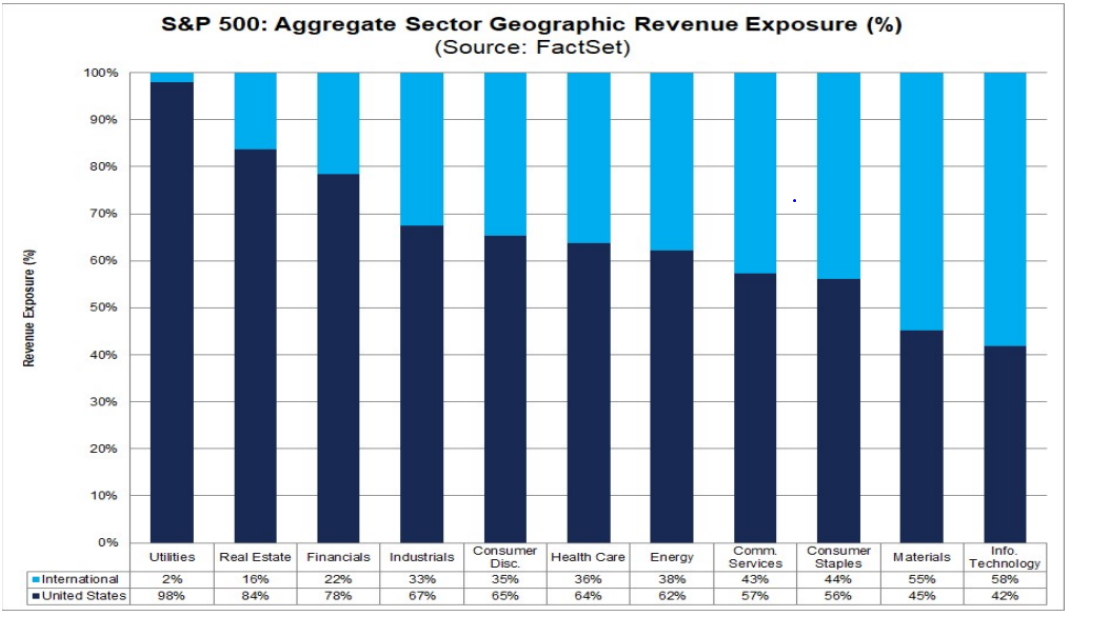 With inflation fears rising and the Federal Reserve hiking rates rapidly, market movement in 2022 has been difficult. The Russian invasion of Ukraine also weighs on markets. Remember that the NYSE and NASDAQ exchanges trade thousands of equities. But you want to uncover the best US stocks to buy now to make enormous returns.

Following the completion of the transaction, Rockwood became a wholly owned subsidiary of Albemarle. Albemarle Corporation ALB earned $897.2 million, or $7.61 per share, in the third quarter of 2022, compared to a loss of $392.8 million, or $3.36 per share, the previous year. In the reporting quarter, adjusted profits per share were $7.50. Revenues increased by nearly 152% year on year to $2,091.8 million in the third quarter. Higher pricing based on solid demand from various end sectors drove the top line.

As of August 2, 2022, the corporation operated, franchised, and functioned as a licensor of hotels and timeshare properties in 139 countries and territories under 30 brand names. Marriott’s reported operating income in the third quarter of 2022 was $958 million, up from $545 million in the third quarter of 2021. In the quarter, reported diluted profits per share (EPS) were $1.94, compared to $0.67 in the year-ago quarter.

Furthermore, 242,600 of the 416,000 rooms in the development pipeline were situated outside the United States, and 204,200 were under construction. Hilton posted strong third-quarter 2022 results, with profits and sales above analysts’ expectations and increasing year over year. While the bottom line outperformed the consensus expectation for the fourth consecutive quarter, the top line outperformed it for the sixth time in a row. Quarterly sales of $2,368 million above the $2,367 million consensus figure. Furthermore, the top line climbed 35.4% from the previous quarter.

Netflix shares jumped more than 14% in October after the business reported better-than-expected top and bottom-line performance. Furthermore, Netflix will begin cracking down on password sharing next year, deciding to let those who have borrowed accounts to establish their own. People who share their accounts will also be able to develop sub-accounts to pay for friends and family to use theirs.

The third quarter, which concluded on September 30, 2022, showed that consumers are prepared to pay greater prices, driving the company’s stock higher in after-hours trading. Total sales were $2.2 billion, a 13.7% increase over the third quarter of 2021. Chipotle hiked menu pricing by 4% in August. It was the third time in the previous 15 months. In-restaurant sales climbed by 22.1% as consumers returned to in-person eating, although digital sales also increased. These sales accounted for 37.2% of total food and beverage income. Sales from delivery services as a percentage of total revenue was 0.8%, down from 1.0 per cent in the same quarter in 2021.

What Role Does Stockal Play In Increasing Exposure To US Stocks?

A good broker and platform are required for international stock market investment. Modern apps have done a fantastic job of catering to Indian users investing in US stocks. Stockal is one such app which focuses on investing in US stocks in India and provides a variety of options like ETFs, stacks, funds, and cash management. Furthermore, certain well-known and respected overseas firms are represented in the S&P 500 Index, Russell 2000 Index, NASDAQ Composite Index, and NASDAQ-100 Index.

Those looking to diversify their investments in the global stock market can consider investing in US stocks. Over a prolonged investing period, a relatively lower correlation between the two leading economies may yield a high risk-adjusted return. You may invest in many ETFs that concentrate on various industrial sectors or significant US companies, or you can purchase particular US equities in India. The NASDAQ 100 and even the S&P 500, the two most important US stock market indexes, are monitored by exchange-traded funds.

Before you can buy the best US stocks now, you must first open a foreign trading account and keep a US bank account open in another country. Stockal is the perfect app for investing in US stocks in India, with many accessible shares, simple tools, and well-researched techniques. In addition, the app promotes investing in US stocks in India with its broad features and well-stated options, such as fund management, fractional investment, and simple compliance.