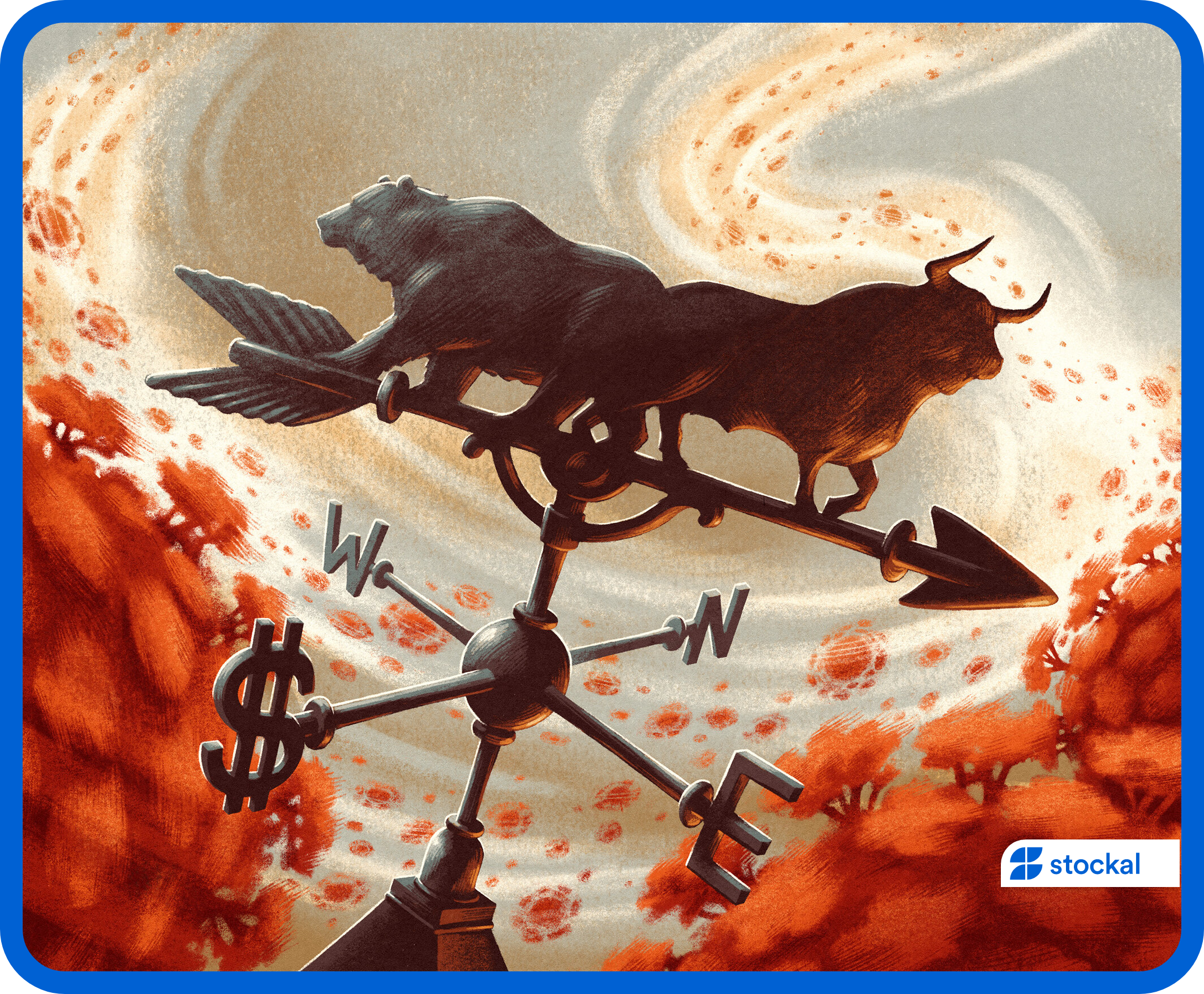 Volatility made a comeback last week, catalysed by concerns around Omicron, the new COVID-19 variant, which the World Health Organization (WHO) labelled as a variant of concern.

Stocks tied closely to the virus have led the market on its week-long seesaw, and that continued till Friday.

Commentary from the Fed chair about speeding up tapering also added some fuel to the fire, but the health uncertainty stole the spotlight, a reminder that the path of the virus continues to shape the course of the economic recovery.

Stocks fell on Friday and ended the week lower after the spread of Omicron caused a period of market swings. Travel and tech stocks in particular dragged down the major averages.

Tech stocks were among the most notable losers on Friday as Tesla (TSLA) dropped 6.4% and Zoom (ZM) declined nearly 4.1%. DocuSign (DOCU) cratered a massive 42.2% after the company issued fourth-quarter sales guidance that was lower than what analysts expected.

While Omicron might have won round one, Wall Street experts are confident about the bull’s ability to take Omicron by the horns, citing overall macro and liquidity conditions that point to a continuation of the bull ride.

What’s more, the noticeable sell-off of several stay-at-home stocks suggests investors are betting that, no matter what happens with omicron, the U.S. is done with the shutdowns.

For the volatile week, Wall Street’s bellwethers saw synchronised drops. The S&P 500 fell by 1.2%, the blue-chip Dow fell 0.9% and the tech-heavy Nasdaq Composite dropped the furthest by 2.6%.

DocuSign’s drop: a sign of the decline of stay-at-home stocks?

DocuSign (DOCU) shares fell 42% on Friday after the company warned that consumers were returning to more normalised buying patterns with the widespread rollout of COVID-19 vaccines and the gradual return to workplaces.

The e-signature software maker missed on a key earnings metric during the October quarter, pulling in $565.2 million in billings, falling short of its prior guidance between $585 million and $597 million. Shares of Adobe (ABD) also sank to their worst performance in more than 20 months Friday, triggered largely by the DocuSign sell-off.

Founded in 2003, DocuSign is one of the early leaders in the digital transaction services space, helping businesses from banks to real-estate firms electronically complete transactions.

The company has seen rapid growth as it benefited from the rise of remote work during the pandemic. DocuSign reported its sixth straight period of revenue growth of over 40% for the third quarter, but anticipates growth to come in around 30% for the next.

While some of last year’s hottest companies saw incredible growth during the pandemic, many are now struggling as earnings show a slowdown and the wider reopening of the economy gains steam.

Stay-at-home stocks like Etsy (ETSY), DoorDash (DASH), Zoom (ZM) and DocuSign that grew the most during COVID-19 and the subsequent lockdowns, were the worst performers this week. This is contrary to what one might expect as the new Omicron variant makes its way around the world.

Analysts, however, believe that electronic signatures and digital contracting will be here to stay, helping improve efficiency and cost savings for companies. Most believe that the market reaction to the earnings is an overly strong reaction.

DocuSign expects its billings to come between $647 million and $659 million in the fourth quarter, growing at a 21% to 23% pace. By comparison, billings grew 40% year over year in 2020’s fourth quarter. It expects billings between $2.34 billion and $2.35 billion for the full year and revenue around $2.08 billion to $2.09 billion. The company added 59,000 customers in the third quarter to a total of 1.11 million customers worldwide.

DocuSign stock peaked in August this year and began a modest slide before diving this week. This however, puts the stock once more at an attractive buy point. DocuSign’s fundamentals remain very strong pointing to a good buy.

Could this super app be a super stock to buy?

Singapore-based Grab – Southeast Asia’s largest ride-hailing company, went public on the Nasdaq through a SPAC merger that valued it at nearly $40 billion. The listing is the biggest in the U.S. by a Southeast Asian company.

Shares however, closed down 21% on day one.

Grab operates in 465 cities across eight countries in Southeast Asia, including Cambodia, Indonesia, Malaysia, Myanmar, the Philippines, Singapore, Thailand and Vietnam, the AP reported. The company started as a ride-hailing service in 2012 and evolved to offer a growing suite of services, including food delivery, payments and more.

Should you make a grab for the super app stock yet?

While the merger with Altimeter valued Grab at $40 billion, some analysts questioned how a loss-making company could be so highly prized.

Though the valuation for Grab is based on assumptions that digital adoption across Southeast Asia will rapidly increase, the company will have to show that it can be profitable.

However, Grab’s super app strategy gives the company a variety of resources necessary to survive like it did throughout the pandemic, whereas companies focusing on one vertical had a tougher time keeping their businesses afloat.

The company competes with other platforms as well as restaurants and stores that have their own delivery services. It bought Uber Technologies’ business in Southeast Asia in 2018, but its non-compete agreement with Uber expires in March 2023, or one year after Uber disposes of its entire stake in Grab, whichever is later. Another possible rival is Didi, which could enter the market after its non-compete with Grab expires.

Grab is a digital company that is expanding within a digitally inclined market. As it continues to expand its portfolio of services and products, and weave them around its customers’ daily activities, it will be an exciting company to watch over the long term.

Despite its already-large market cap; Grab has a long runway for growth ahead, which could spell solid returns for investors. It just could be a SPAC worth grabbing.

Shares of Snowflake (SNOW) jumped 15.9% on Thursday after the cloud-data leader delivered outstanding growth metrics in its fiscal 2022 third-quarter report.

The data-cloud company’s revenue rocketed 110% year-over-year to $334.4 million. Its performance was well above Wall Street’s estimates, which had called for sales of $305.6 million.

The gains were driven in part by the company’s rapid international expansion. Revenue in Snowflake’s Europe, the Middle East, and Africa (EMEA) segment surged 174%, while sales in its Asia Pacific/Japan (APJ) division soared 219%.

Buffett previously said that investors often buy into an IPO because of the hype involved with them and because they want to catch up with others getting rich, and that’s not a sound basis for an investment.

P.S.: The legendary value investor hadn’t invested in any other newly public company since the Ford IPO in 1956.

Do we predict a bit of snow for your portfolio?

Snowflake is benefiting from a powerful combination of new account growth and higher sales to existing customers. The software company’s total customer base grew 52% to 5,416, while its net revenue retention rate was an exceptional 173%.

Although Snowflake is not yet profitable based on generally accepted accounting principles (GAAP), it did produce an adjusted operating profit of $8.5 million and free cash flow of $9.5 million.

These impressive results and ongoing positive sales trends prompted Snowflake to boost its full-year financial forecast. Management now projects that its product revenue will increase by approximately 104% to $1.13 billion in fiscal 2022. That’s up from its prior guidance for revenue growth of roughly 92%. Multiple analysts have responded by hiking their price targets for Snowflake’s shares.

Snowflake stock may have jumped on its Q3 earnings report, but the software stock has been volatile. Its current entry point is no longer actionable given market conditions. Snowflake stock is not currently in a buy zone.