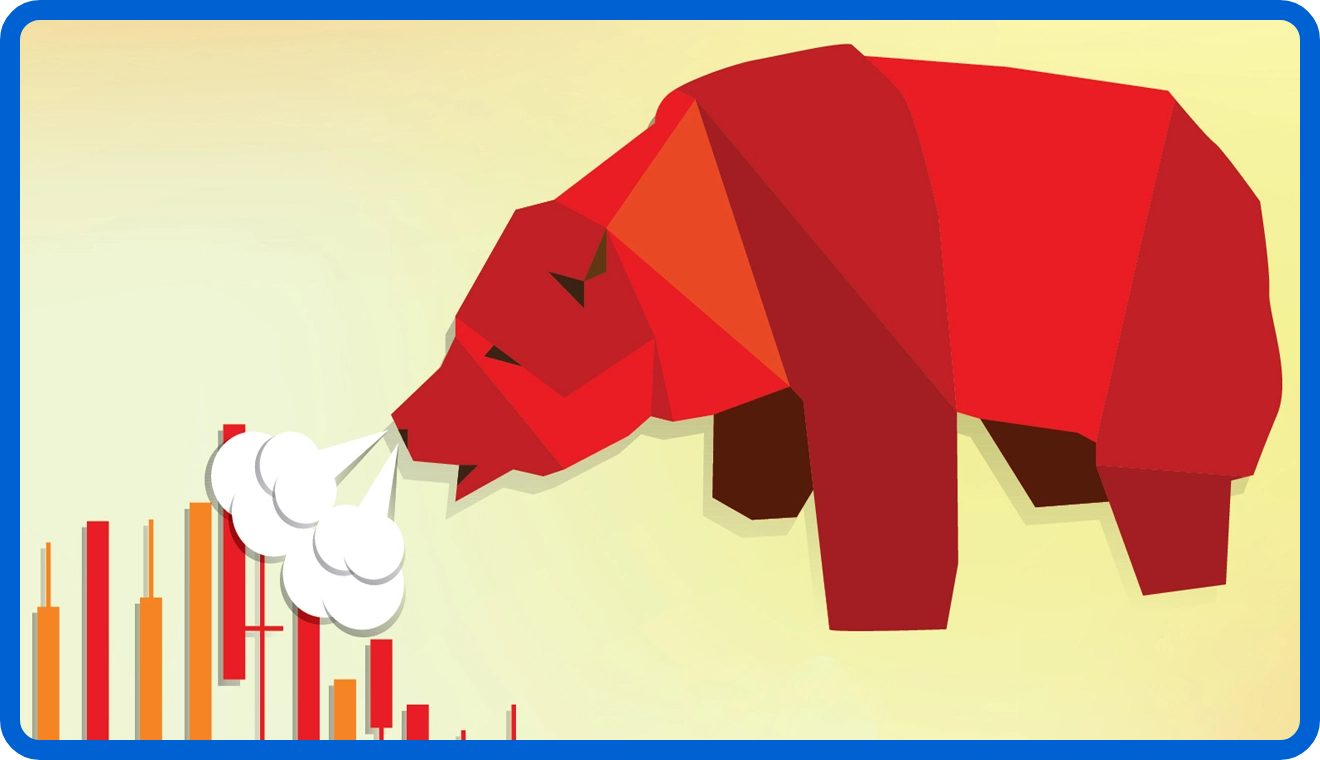 2022 hasn’t been particularly easy on the S&P 500, or to investors for that matter. The index is now within breathing distance of the 20% bear-market threshold, having missed sliding into official bear territory last week by a narrow margin.

Since hitting an all-time high on the first trading day of the year, Wall Street’s Bellwethers have been in a steady downtrend and made a fresh one-year low last week. Lingering inflationary pressures, monetary-policy tightening, and heightened geopolitical risks continue to catalyse volatility.

In volatile phases such as these, it’s important to note that investor sentiment tends to be a good contrarian indicator. As such, market peaks are often marked by investor complacency, while market bottoms are marked by pessimism and panic.

Historically, when the “fear index” (a term coined by VIX for the measure of market volatility) has spiked over 40 in the past, it has been followed by strong equity returns.

In the same way, when less than 20% of stocks have traded above their 200 moving average, markets have tended to rebound.

Another silver lining to this development is that bear markets are often quicker than bull markets. Also, elevated volatility has not historically lasted for a long time and has been followed by periods of strong returns.

While there’s no sure-fire way to predict the bottom of a decline, it’s important to stay invested through a full market cycle while making tweaks, or opportunistic portfolio adjustments, as conditions evolve.

Disney proves it’s not a mouse in the OTT battle

Analysts had in fact forecasted 5.2 million new subscribers for Disney for the first quarter. Netflix, meanwhile, has predicted a 2 million drop for the second quarter.

Across all of Disney’s streaming services, which include Disney+, Hulu, ESPN+, the total subscriptions exceeded 205 million. This is a quarterly net increase of 9.2 million driven by its flagship streamer – Disney+. Hulu contributed 45.6 million this quarter (up by 10% Y-o-Y), and ESPN+ added 1 million for a total of 22.3 million (up by a whopping 62% Y-o-Y).

Disney’s shares rose by 3% after hours, on the news.

One big driver of subscriptions this quarter were viewers of the IPL cricket matches, which resumed in March. Around half of the 7.9 million net new subscriptions it added came from subscribers to Disney+ Hotstar, which is in the midst of its final year of a five-year deal to broadcast the sport. FYI, Disney+ Hotstar customers account for about 50 million of the total Disney+ subscriptions.

Disney’s quarter sure wasn’t picture-perfect, but it was indeed applause worthy, given all the macro challenges – especially when contrasted with its close competitors in the OTT space.

Despite its recent modest gain, Disney stock has declined by almost 20% over the last month and also remains down by almost 45% from its 2021 highs.

The entertainment behemoth has also seen some setbacks in recent weeks, where it was up in arms with Florida lawmakers as a result of its opposition to the gender and sexuality education bill.  However, much of the stock’s correction appears to be driven by apparent concerns about the Disney+ streaming business, following Netflix’s tough Q1 earnings.

There is also a lot going well for Disney, including robust demand at its U.S. theme parks that helped that segment’s operating income exceed Wall Street’s expectations.

Despite the recent concerns in the streaming industry, Disney stock looks like a calculated buy. Unlike Netflix, which monetises its content investment solely via monthly subscription fees, Disney has a much larger value chain, given its theatrical business, theme parks, merchandise, and licensing operations.

Also, Disney’s content investments are likely to be much more durable, given its iconic franchises, unlike Netflix which focuses a lot on one-off shows.

Finally, Disney’s valuation multiples are also quite compelling. The stock trades at about 27x consensus 2022 earnings and a tad over 20x 2023 earnings.

Airbnb’s checks into a recovery phase

Airbnb (ABNB), the rental giant, almost collapsed when COVID-19 hit. The company axed about a quarter of its workforce as bookings on the platform across the world ground to a halt. However, the rental giant staged a quick pivot and even managed an IPO right in the midst of the pandemic.

The company recently beat estimates with 70% revenue growth as travel rebounded. Today, Airbnb is scripting its post-pandemic playbook and has launched its biggest makeover in more than a decade.

The makeover comes on the heels of its bookings reaching a record 102 million last quarter, of which nearly a quarter were long-term rentals. The company also expects a strong summer travel season to keep notching up its impressive sales.

Airbnb’s revamp includes the ability to search by category – from castles to tiny homes, without any specific destination required.  The company also introduced its own version of travel insurance called AirCover – essentially free travel protection with a 24-hour safety line, and a “get what you booked” guarantee. Another unique new feature, Split stays, lets users split longer trips between two homes should appeal to the new breed of digital nomads. Yet another new category, “OMG” getaways, highlights its more unusual stays, from private islands, to castles to alien-themed glamping sites and more.

Airbnb stock has wowed investors since its Nasdaq debut in December last year. From its initial public offering price of $68 per share, ABNB stock has soared as much as 223%.

Bear markets can seem unfair: Once the selling starts, fundamentals tend to be ignored, and share prices move lower – a classic case with Airbnb.

So is now the time to check into this stock?

Airbnb’s fundamentals are not only rock-solid — they’re impressive.

One compelling argument for Airbnb’s stock is its outstanding earnings results. The company continues to take market share from its competitors. Airbnb is now the leading U.S. travel site with close to 5% of overall traffic.

Bear stock can be scary and with good reason. However, for long-term investors, bear markets are a great time to buy good companies when they’re oversold – and Airbnb seems to fit that mould.

Despite reporting excellent first-quarter results, shares are at all-time lows – hinting that it could be the time to stock up on a company with a great business model, solid fundamentals, and a strong management team.

Why Upstart’s stock is down

Shares of BNPL (Buy-now pay-later) firm Upstart (UPST) fell by 56% yesterday, despite the company’s better-than-expected earnings. Its revenue more than doubled while its profit grew 3x.

The AI-driven platform connects people with less-than-stellar credit scores to lenders with favourable terms. Its mantra: “you are more than your credit score.”

Where does the problem lie, you ask? Well, Upstart cut its revenue forecast for the year and predicts lower sales and zero profit for this quarter.

BNPL players like Upstart, present an easier, more seamless alternative to having to type out your credit card information again and again – with just a few clicks and a small down payment.

The services, also known as point-of-sale loans, are heavily marketed by influencers and brands on TikTok and Instagram who not only normalise debt, but also glamorise it.

BNPL is sending its Gen-Z customers spiralling into debt, which is a cautionary tale for the category.

Nevertheless, BNPL players are positioning their services as more responsible, less predatory alternatives to credit cards and personal loans while emphasising the accessibility of their services, especially for younger consumers looking to bolster their credit and consumers working to restore their credit scores, despite the fact that many of the services don’t report on-time payments to credit agencies.

Should you add Upstart’s stock to your cart?

Down by around 60%, Upstart has had a spectacular fall from grace. While Upstart’s first-quarter results did much to reaffirm the company’s massive opportunity, the company’s guidance gave investors pause, and the sell-off was equal amounts swift and brutal. However, every indication points to the fact that the selling was overdone.

Investors should keep in mind that Upstart is disrupting the traditional lending paradigm. The personal, auto, and mortgage loan markets represent a total addressable market of nearly $5.4 trillion, a figure that doesn’t count the $644 billion small business market.

It’s also important to note that Upstart’s triple-digit growth rate continued. Upstart’s valuation is now in the bargain basement territory. The stock is currently selling for less than two times forward sales when a “good” price-to-sales ratio is between one and two.

It also marks the cheapest valuation in Upstart’s history, suggesting that Upstart is a buy.