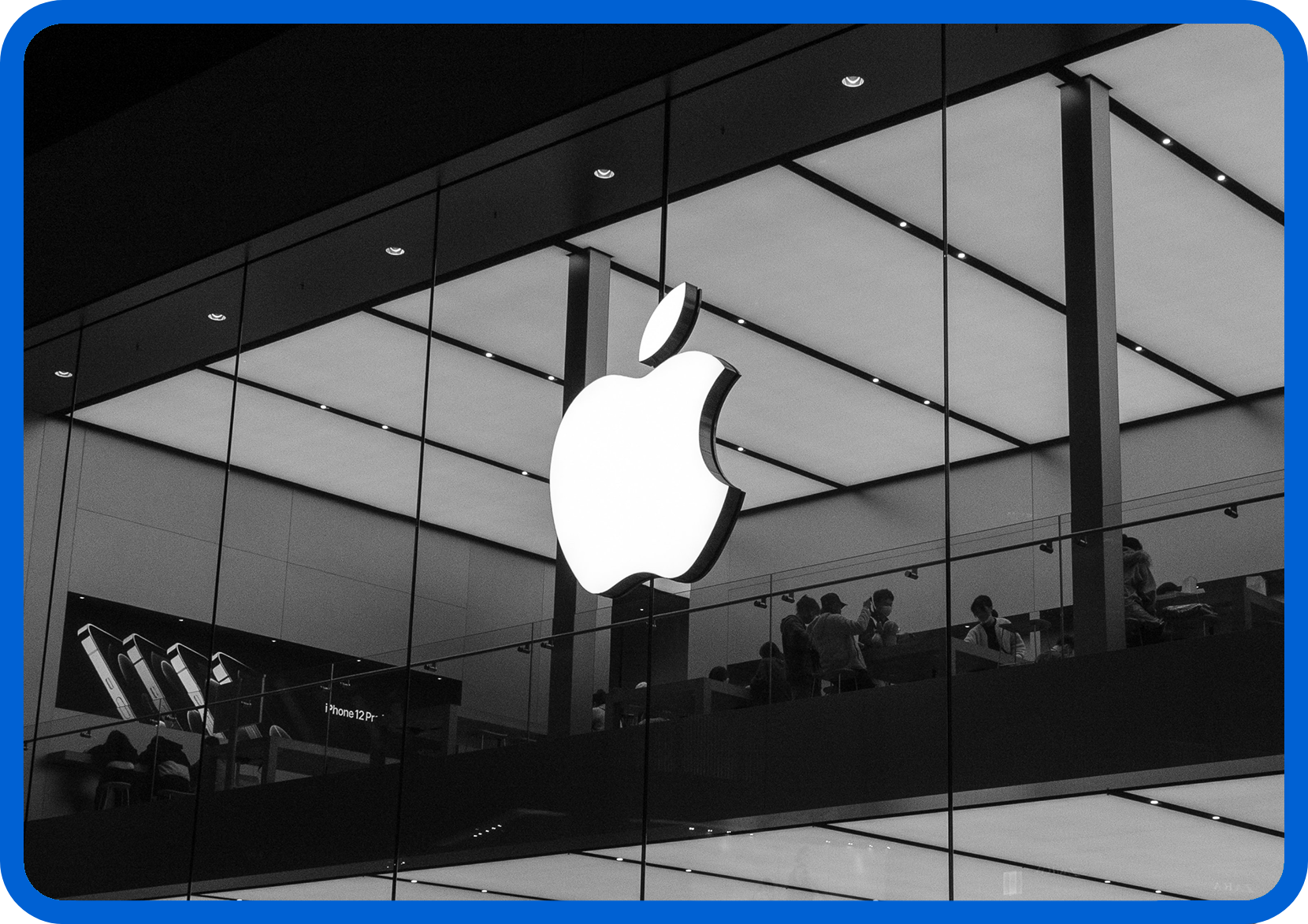 Any guesses on what is the current price of an Apple share in INR?

Before you go and end up searching, the answer is it hovers between ₹11,000 to ₹14,000 on average(after considering the split-adjusted price). However, it would pique your interest to know that if there were no stock splits done by Apple, the price of a share would be as high as $1,800(₹1,44,000, assuming a ₹80 conversion rate) as of 2021.

So, it’s kind of natural to want to have a piece of the pie of this tech mammoth, especially if you’re in a country like India, where the popularity of its products is immense.

So, how to invest in Apple stocks from India? Let’s find out.

Apple at a glance in recent times

Apple, in January 2022, was the first company to hit the three trillion dollar mark. In terms of cash, it is the world’s richest company. The organisation has more cash on hand than all other Indian IT firms combined.  The market value of Apple exceeded the GDP of 186 countries, including India. Only the United States, China, Japan, and Germany have a better track record.

Despite a slump and fall, Apple, again in May 2022, has topped the technology rankings, partly due to $378.7 billion in sales, a 29 %  gain over the previous year. With a $ 2.6 trillion market cap, Apple has reclaimed its position as the world’s largest firm by market value.

Apple’s data appeals to many and even to the most prominent stock market influencer Warren Buffet. Buffett has referred to Apple as Berkshire Hathaway’s “third-largest business,” behind its completely owned insurance and railroad businesses. Buffett has also described Apple as “the best business I know anywhere in the world.” Berkshire Hathway owns 907,559,761 shares of Apple at the value of  ~$161.2 billion.

Anyone who is interested in learning how to buy Apple shares in India should be persuaded by the investments of a businessman whose net worth surpasses $100 billion, right?  If you’re still confused, keep reading.

How did Apple rise to the top of both the IT and stock markets?

The commitment and dedication of Apple customers to the company are truly astonishing. But what sets Apple apart from the competition? Apple is a technology company that has mastered both hardware and software. Apple’s strength in vertical integration enabled the company to create an unsurpassed User Experience (UX). It created an environment as well as a community which means you are either a cult member or not.

Effectively, Apple has the leading market share across most of its products:

Apple introduced the iMac in 1997, which was merely the beginning of a successful range of devices that highlighted the company’s new emphasis on aesthetics and user experience. Among them were the iBook, iPod, iPhone, MacBook Air, and iPad. The iPod effectively launched and then dominated the MP3 player market, and the iPhone effectively launched and dominated the smartphone market.

The iPad then convinced thousands of people that they required still another screen to absorb information. The list does not stop there. Apple introduced a whole section of wearables and accessories that includes the watch, the Airpods, chargers, Airtags and cases that gave luxury a whole new meaning. Apple has also stepped into various services such as Apple music, podcasts, arcades and Apple tv. No man is an island, but a person who is completely immersed in the Apple ecosystem may barely have any other needs and wants.

Apple’s tale, we believe, is recounted from the top of Maslow’s Hierarchy of Needs, which addresses that we as humans have fundamental needs that must be addressed to accomplish greater aims.

Apple has long sought to encourage and support self-actualisation. It convinced many over the new iPhone that when you pay approximately over a lakh for an iPhone, is the hole in your pocket the first thing you feel? Probably not. It is a feeling of achievement, a joy of purchasing a premium product. While leaving the store you probably feel happy that your self-esteem needs have been addressed. All Apple needs to do now is enter the domain of fundamental human physiological needs, which to some extent, it does by leveraging the Apple watch.

While some observers feel Apple’s days of groundbreaking inventions are behind, the company continues to make technical advances. From cell phone connection on its watches to wireless charging in its latest gadgets, Apple has done it all. It keeps raising the bar. Apple has continued to defy expectations as a well-established brand with a committed audience. For the time being, it looks that the corporation is securely planted as the most valuable company in the world, and it is unlikely to be bested very soon.

Who are the top investors of Apple stocks?

By investing in Apple shares, you will most likely be joining a big league of investors. Apple has six major investors, three individuals and three institutions.

Should you invest in Apple stock from India?

It’s no surprise that the company responsible for ushering in the computer age and inventing the iconic iPhone would get the majority of its income from these products. In the financial 2022 year ending June quarter, the company posted revenue of $83 billion which is up 2% year on year.

The iPhone has long since achieved the status of being Apple’s bread and butter. In the company’s fiscal second quarter, iPhone sales accounted for more than half of all revenue, totalling $50.6 billion. This has been the case for many years, and Apple’s iPhone development efforts can continue this trajectory.

2. Apple is more than just a computer company:

It’s logical to anticipate that Apple will suffer from inflation. Rising prices may encourage some customers to put off purchasing Apple’s latest gadgets. Apple, on the other hand, is more than just a hardware company. It quietly built a slew of software-as-a-service (SaaS) products that generate recurring income through subscriptions over the years.

The AppleCare warranty and repair programme, Apple Pay, iCloud, and digital content subscriptions for music, movies, TV shows, and video games are all part of Apple’s services area. This division’s revenue has steadily climbed throughout the years, going from $46.3 billion in fiscal 2019 to $68.4 billion in fiscal 2021.

A bite of the forbidden fruit turned the whole world upside down and ended the Golden Age. A bite of this Apple will keep giving. To understand the value of investing in a behemoth like Apple, let’s stimulate an investment calculator.  Let’s say that you invested $1000 in Apple stocks in 2002, which would have amounted to approximately INR 49,000 (USD to INR, 2002 was approx. INR 49).

Apple is a large market capitalisation technical corporation. It has historically been a great performer – making many early investors very wealthy – and analysts tend to agree that the stock is worth purchasing. However, because any one stock might be volatile, you should analyse each purchase in the context of your whole portfolio.

Purchasing Apple now is likewise far less risky than in the early 1980s.

How to Invest in Apple Stock from India?

By now you are flush with information and data on why buying Apple stocks could prove to be a solid investment, so let us move on to understanding how to buy Apple shares in India. Since the advent of the iPhone in 2007, which dramatically revolutionised its fortunes, Apple has enjoyed a stratospheric rise up the rankings. Apple is already the market capitalisation leader and a favourite among investors. So let’s get into the ways of investing in Apple from India:

This strategy entails creating a US trading account with a platform like Stockal. In accordance with the RBI’s overseas investing standards, you will be required to fulfil KYC by providing documents such as the Aadhar and Pan Card and LRS requirements which will hardly take any time. The RBI allows foreign investments of up to $250,000 each fiscal year.

Stacks are stock and ETF packages offered by Stockal that can be purchased with a single click. The stacks invest in a limited number of top-performing firms in a specific industry. For example, the US Tech Bluechip Stack invests purely in technology internet firms that have market-leading competitive advantages.

If you’re someone who’s unfamiliar with direct investing or do not have the time to monitor the stock every day, then you can consider investing in ETFs or Exchange Traded funds that have holdings in Apple. ETFs are a group of various equities and bonds that trade as a single fund. They are comparatively more affordable than stocks.

Investors can gain exposure to Apple by participating in some of the local-based mutual funds that invest in the US or global markets directly or through the feeder fund method. While this will not provide you with 100% Apple exposure, it will also expose you to other stocks, such as Facebook, Amazon, and Google.

Roughly 5 years ago, we would have to wait for our friends and relatives to bring back chocolates that weren’t available in India. We would have to find some exorbitant importers in some nook and cranny or simply wait. However, we never had the same options of investing in companies abroad that we admired. A lot has changed now. For stocks, Stockal has made it easy for Indians to invest in companies whose products we have been using for years. Now we don’t have to look at the ticker and wonder, “oh, what a great investment this would have been?” We can simply log in to Stockal, easily meet with all the compliances and invest in companies like Apple from our homes in India.

You can buy Apple stocks in India through services such as Stockal that provide an easy platform to invest money directly in Apple stocks. All you need to do is ensure compliance with RBI rules and KYC completion.

If you invest in the US stock market, you could get dividend payments from companies, much as the Indian stock market. The tax rate for this type of investor’s income would be 25% in the US.

You have now already paid ₹4000 in the US as taxes but according to the DTAA, you are only liable to pay ₹800.