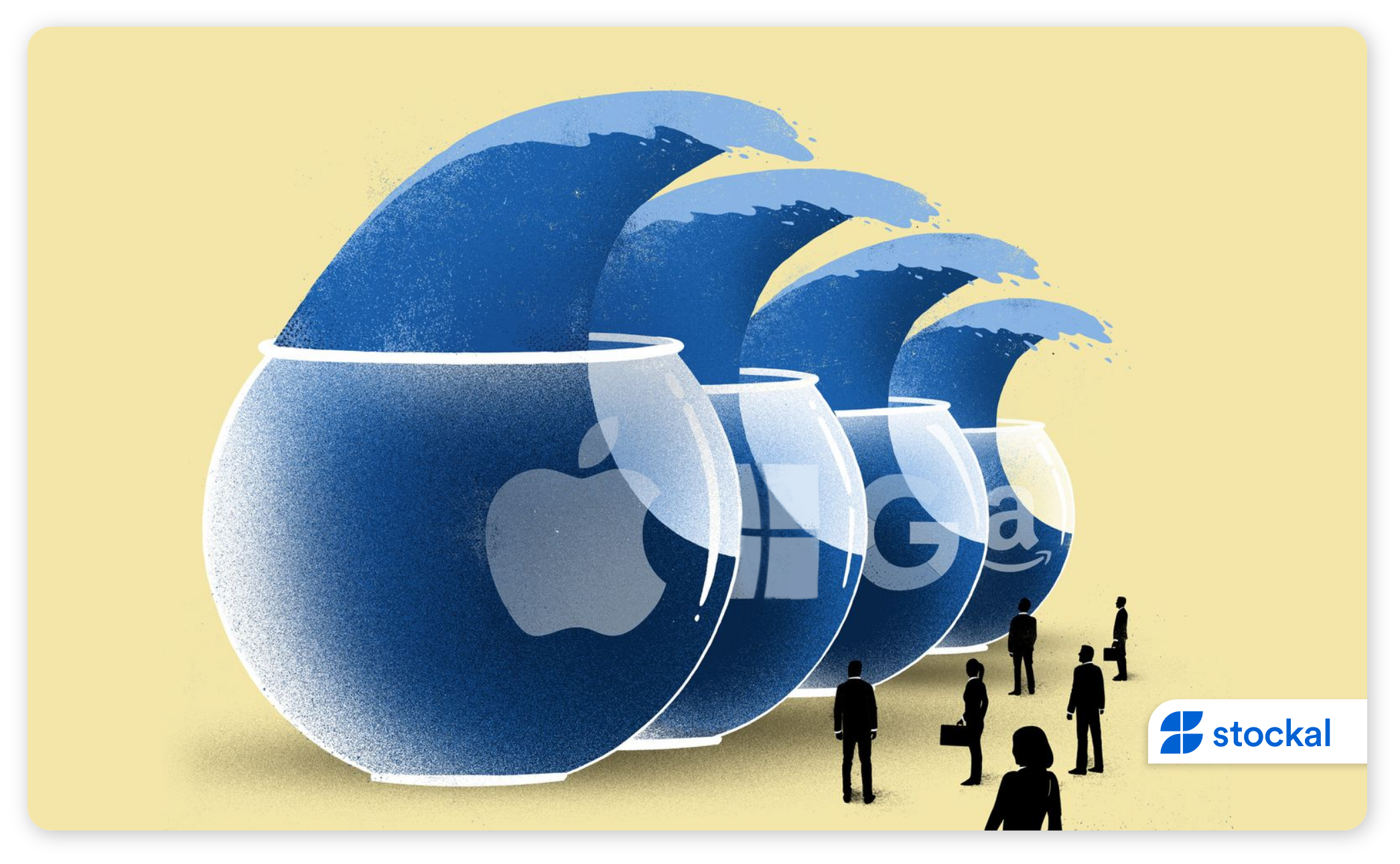 Tech stocks have been on the roll with the second-quarter earnings season holding up well for these companies. If the current earnings season is of any indication for these tech giants, it is only the start of the positive growth potential to be witnessed in the second half of 2021. Alphabet (GOOG) has been one of the top performers year-to-date in 2021 with the stock gaining over 50% in 2021. Certainly, a positive start to the earnings season has helped these stocks rally to their best five-day streak of gains since March 2021. However, volatility returned to the markets this week ahead of the earnings season as investors remain worried about the pace of economic growth and rising inflation.

As we come to the close of another fiscal quarter U.S. companies are now reporting their earnings for the quarter ended June 2021.  Microsoft (MFST) is worth watching among Wall Street investors as one of the largest companies in the world in business, networking, gaming and technology industry with a year-to-date (YTD) returns of over 30% while the S&P 500 index has risen almost 17% over the same period. The company reported its Q4 2021 earnings during the week and beat analysts’ expectations both on the topline and bottom line. Revenue growth of its cloud business saw the company’s Azure platform grow by a whopping 51%.

Intelligent Cloud Segment which mostly includes Server products and cloud services (Azure) and Enterprise Services reported revenues of $17.38 billion vs. $16.4 billion (expected) an increase of $4.0 billion or 30% year-on-year driven by the company’s cloud services Azure. The pandemic-driven shift to remote work has boosted consumer appetite for more cloud-based computing which helped the company’s cloud business grow during the quarter. Azure revenues grew by 51% well above the analysts’ expectations of 45.3% during the quarter as growth in consumption-based services picks up.

Exhibit 4: Microsoft’s Products and services growth during the quarter (in percentage)

Microsoft’s Cloud is the key to the company’s growth

The company’s cloud business is the key for its impressive stock performance over the years, powering its market capitalization to an all-time high of $2 trillion for the first time in June this year. The company stands to benefit going forward as more companies continue to focus on the cloud. While the cloud is the key growth driver for the company in recent years, the market is far from oversaturated even with competition coming in from Alphabet (GOOGL), or Amazon (AMZN).

Exhibit 5: Microsoft’s share price since the financial crisis in 2008

The pandemic benefitted the company’s results for some segments while impacted the other segments too. Search advertising revenues grew 53% as the advertising market rebounded which in turn also benefited the company’s LinkedIn business which grew 46% during the quarter. LinkedIn generated overall revenue of $10 billion annually.

The company in its press release expressed that the accelerating digital transformation and consistent strong execution are likely to drive growth in the next few quarters along with a growing commitment to Microsoft Cloud. With a strong balance sheet, increasing revenues and diversified business, the company is well-positioned to continue its uptrend in all its business segments and add value to its shareholders.

Apple (AAPL) announced its third-quarter results during the week and it seems that the company’s golden run continues as it reaches new heights in its business growth. The company reported revenues of $81.4 billion (a 36% year-on-year growth) spearheaded by its record iPhone sales which increased nearly 50% on an annual basis. The company also beats Wallstreet estimates on record profits of $21.74 billion during the quarter. Over the past year, the company’s shares have provided a total return of over 50% to its shareholders.

Exhibit 6: Shares of Apple vs. Nasdaq Composite over a year

Data as of 28 July| Source: Yahoofinance.com

iPhone sales at record high contributing to $39.57 billion during the quarter

The company’s each of product categories saw double-digit growth during the quarter and a new all-time high for the installed base of active devices. However, the iPhone segment saw its highest sales growth due to its rising popularity leading to $39.57 billion with almost 50% growth from $26.42 billion seen a year ago. iPhone sales accounted for 48.6% of the total revenues during the quarter. The increased iPhone sales were not just from the people upgrading their old iPhones but also a large number of customers making a switch from Android to buy their first iPhone.

Exhibit 8: Percentage break-up of each of the revenue segments during the quarter

Services segment (which includes Apple Music, Apple Arcade, Apple News, Apple TV, advertising services, Cloud and other services) recorded about 33% growth year-on-year at $17.5 billion which was the second biggest revenue attributor after the iPhone segment. The company now has a paid subscribers of 700 million which is up by 150 million year-on-year.

Both iPad and Mac segments also saw year-on-year growth of 12% and 16% respectively. However, the business was impacted by supply shortages linked to the global chip shortage which affected the company’s Mac and iPad sales.

The company saw a record June quarter in terms of new revenue records in each of the geographic segments. While the U.S. region accounted for 44% of the total sales at $35.87 billion which was up 33% year-on-year, the company also saw strong sales coming in from Europe and Greater China (which includes Taiwan and Hong Kong in addition to the mainland) regions. Apple reported sales of $18.94 billion from Europe and $14.76 billion of net sales reported from the Greater China region which was up 58% from the same quarter seen one year ago.

Exhibit 9: Region-wise revenues for the Quarter

The management did not provide any guidance for the third quarter due to uncertainties caused by the pandemic. However, the company expressed that the silicon supply constraints are likely to affect the iPhone and iPad sales during the September quarter and Apple’s services business could slow down in the coming quarters as people are most likely to return to work and spend less time on online services and apps.

Apple’s CEO Tim Cook quotes: “We’re continuing to press forward in our work to infuse everything we make with the values that define us- by inspiring a new generation of developers to learn to code, moving closer to our 2030 environment goal, and engaging in the urgent work of building a more equitable future.”

Alphabet, the parent company of search engine Google (GOOG) reported its Q2 earnings which beat street expectations bolstered by increased revenues from its advertising and cloud computing businesses. The overall revenues for the quarter were higher by 62% year-on-year which saw the stock price rally over 3% post its strong quarterly numbers and if the gains continue to hold, this is likely to take the company’s market capitalisation close to 2 trillion which is now trading at 1.8 trillion USD. The stock has gained over 80% in the past year.

Exhibit 10: Stock returns of Alphabet vs. Nasdaq over a year

Growth during the quarter attributed to Google search and Ad revenues

Google Services: primarily generates revenues from advertising, sale of apps, in-app purchases, digital content products and hardware and subscription-based products such as YouTube Premium and YouTube TV (includes products and services such as ads, Android, Chrome, hardware, Google Maps, Google Play, Search and YouTube). This segment is the primary growth driver of the company reporting over 90% of the total revenues in the June quarter at $57.07 billion from the previous $35 billion a year ago.

Google search and ad revenues contributed to the major portion of the quarterly revenues which increased by 69% year on year. Google ad revenues increased to $50.44 billion during the quarter and retail was by far the largest contributor to the company’s ad growth.

YouTube reported revenues of $7 billion which was up 84% year-on-year and bringing it close to Netflix’s quarterly revenue of $7.34 billion.

Google Cloud: this segment generates revenues from fees received for Google Cloud Platform services and Google Workspace collaboration tools which saw revenues of $4.6 billion as against $3 billion a year ago (up 54% year-on-year). This growth is slightly above what the company’s rival Microsoft posted for its Azure cloud unit. The company’s long-term investments in Artificial Intelligence (AI) and Google Cloud services are helping to drive and improve the overall digital experience of its customers.

Overall revenue growth was seen in both the business segments as Google ads saw a comeback, YouTube ad revenues nearly doubled and the Google cloud revenues came in higher by 53% year on year. The overall rising tide of online activities seen during the quarter in many parts of the world helped many of Google’s consumers and businesses and signifies the overall strength in advertiser spend.

At the same time, the tech giant also reported a significant growth in terms of operating income, which was reported at $19.3 billion as compared to $683 million a year ago.

Google along with other tech giants like Facebook (FB), Amazon (AMZN) and Apple (AAPL) have lately found themselves under the political storm as lawmakers debate upon tightening regulations on these large technology firms. Google CEO Sundar Pichai has warned that internet freedom is mostly under threat as governments are moving to safeguard user data and privacy and block the dissemination of misinformation.

The company expressed a more muted tailwind to revenues in the next quarter and that it’s too early to forecast the longer-term trends for the company’s growth as markets re-open. Additionally, the Covid case rates continue to grow and would likely impact the business in the coming quarters. The management also expressed the company’s back to work plans are still on track for September 2021.