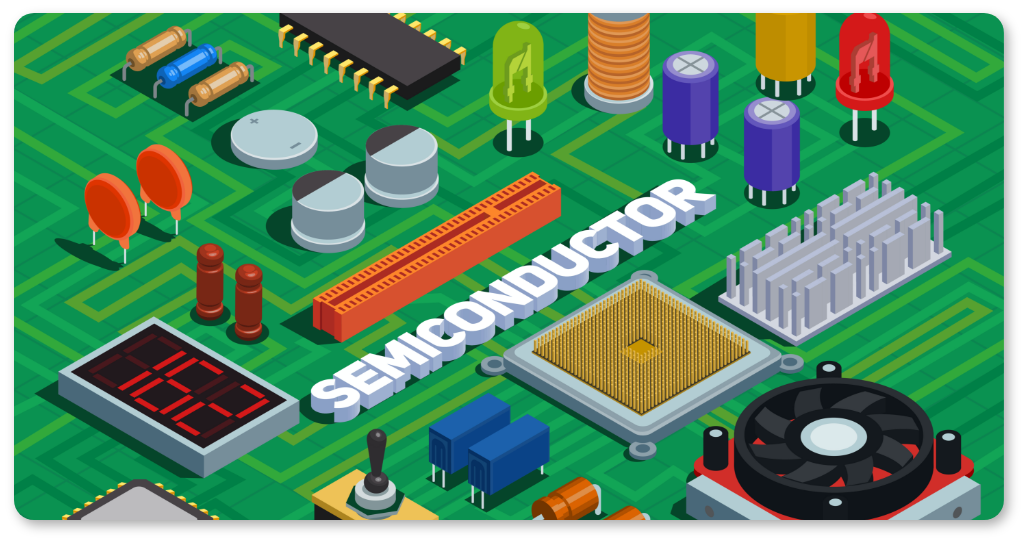 Despite the global pandemic and resulting economic downturn, the global semiconductor industry remained resilient with revenue growth of 6.5% to reach the $440bn mark in 2020. As per the 2021 Global Semiconductor Industry Outlook, the logic and memory chips segments were among the fastest growing with over 10% growth reported from each of these sub-categories in 2020. The industry is estimated to grow over 15% to $488bn in 2021 (Exhibit 1) with the memory-chips segment likely to be the fastest-growing category estimated to grow over 13% as forecasted for 2021.

Why are semiconductors so important?

Semiconductors such as memory chips are a backbone and a prerequisite for any endeavours in emerging technologies. From Artificial intelligence (AI) reliant smartphones to the adoption of the Internet of Things (IoT), 5G, or the automotive sector- nothing has been left untouched by the semiconductors. Semiconductors or the chip is used to power technologies that enrich the lives of consumers and make businesses run smarter, faster, and more efficiently.

Data as of Feb 2021|Source: KPMG Global Semiconductor Industry Outlook Note* rated on a scale of 1-5 with 1- not at all important and 5- Very Important

Companies across the semiconductor value chain operate in different processes and technologies (like design, fabrication, and assembly) in pursuit of economic efficiency. However, no region has achieved strategic autonomy in the industry. U.S. fabless companies rely on foundries in Taiwan to manufacture the chips. The foundries, in turn, rely on equipment, chemicals, and silicon wafers from the U.S., Japan, and Europe. Thus, the technological complexity and need for scale have led to the emergence of a large number of players with business models focused on a specific layer of the semiconductor value chain (Exhibit 3).

The U.S.and China tech wars and their impact on the semiconductor industry

The tension between the U.S. and China has resulted in a possible decoupling between the two economies. The U.S. is developing new strategies to prevent itself from falling further behind China in chip manufacturing as trade tensions continue to grow.  Over the last few years, both countries have relied on each other as China is highly dependent on U.S.-origin chip technologies and the U.S. government uses its export control regime to curb technological advancements of Chinese companies. Ex-President Trump’s “America first” policy, followed by the U.S.-China trade war called for a decoupling which would reduce the dependence on Chinese-based supply chains by the U.S.

For years, the U.S. has been the leader in the development of new chip products like GPUs and microprocessors. However, the country is losing ground from a chip manufacturing standpoint. Semiconductor manufacturing is critical to maintaining technical leadership in terms of supply chain issues and from an economic perspective. According to the U.S. Semiconductor Industry Association (SIA), the worldwide share of U.S. installed wafer fab capacity has declined to 12% in 2020 from 19% in 2000 (Exhibit 5). Some key trends include:

Promising developments for the U.S. to regain the edge in chip manufacturing

The U.S. realizes the need to build more domestic fabs post the fallout in chip manufacturing and steps are being undertaken to ramp up competitiveness in all aspects. U.S.-based companies continue to lead the market in chip design, EDA tools, fab equipment, and speciality processes. Some of the notable developments in this space include the following:

U.S. Federal Incentives are likely to turn the tide

Federal incentives are a key for in-house manufacturing as the cost to build and operate a fab in the U.S. is 25-50% more expensive than alternate locations. (Exhibit 5). The Biden administration’s emphasis to boost investment in the sector after the pandemic-related car chip shortage exacerbated fears of relying on foreign manufacturers of critical technologies. Some of the incentives in this sector include:

A global semiconductor shortage and increased demand for microchips are likely to boost the cash flows from operations for foundries and outsource assembly and testing (OSAT) companies in 2021 as per the Fitch Ratings. Foundries like TSMC and Samsung are likely to be the key beneficiaries of the robust 2021 chip demand as they will enjoy strong pricing power. TSMC with its market share of over 50% in the foundry industry is likely to see revenue growth of 10-15% in 2020-25.  Additionally, the revenue growth for the OSAT companies is likely to see substantial growth in 2021 as higher chip demand will boost the need for assembly and testing services (Exhibit 6). The chip shortage could also lead to a cyclical uptrend for larger IDMs and fabless companies like Intel (INTC), Texas Instrument (TXN), Nvidia (NVDA), Advanced Micro Devices (AMD).

Data as of June 2021|Source: Figures are sourced from Wallstreetzen.com

The semiconductor industry is not evenly distributed and is dominated by a few countries, mainly U.S., Taiwan, South Korea, Japan, China, and Europe. There is no single region with the entire production stack in its territory.  As per SIA, 57% of the semiconductor materials, 56% of wafer fabrications, and 70% of the memory come from Asian countries. The U.S. leads the way in electronic design automation (EDA), logic, equipment, discrete and analog. This deep interdependence makes it difficult for any single country to maintain leadership in the entire value chain globally. (Exhibit 7).

Data as of April 2021/Source: eetimes.com

Tensions between U.S. and China

Taiwan accounts for 92% of advanced semiconductors and nodes below 10 nanometers manufacturing. The current trade tensions between the U.S. and China are likely to impact chip production in Taiwan. TSMC, which is the world’s largest contract chipmaker, recently cited in its annual report that the trade wars between the two countries could raise prices higher or limit access to necessary chip supplies. Since TSMC gets most of its supplies from the U.S., the company may face challenges obtaining raw materials for production.

Making semiconductors can be complex and comes with huge costs. The foundries and OSAT companies are likely to face increased pressure on capital expenditures as they continue to expand production to address the rising chip demand. Setting up a new foundry can cost anywhere around $15bn-$20bn and require extensive manufacturing know-how and robust infrastructure to operate. The back-end facilities for assembly, packaging, and testing can run between $5bn to $7bn. Additionally, firms invest a significant portion of their revenue on capital expenditures and R&D. As per the SIA report, the world collectively needs to invest $3 trillion in R&D over the next decade to keep pace with the growing demand. The total R&D spend throughout the industry amounted to $92 billion in 2019. Samsung, TSMC, and Intel are among the largest investors in the chip. (Figure 8)

Data as of May 2021/Source: Financial Times

To conclude, the semiconductor industry is poised for significant growth in 2021 and beyond, post its recovery from a cyclical downturn. Technology inflections such as 5G wireless, artificial intelligence, Internet of Things, cloud computing and  machine learning are driving up the long-term demand for the chip industry. Increased government funding and incentives remain a key for its rampant growth going forward.