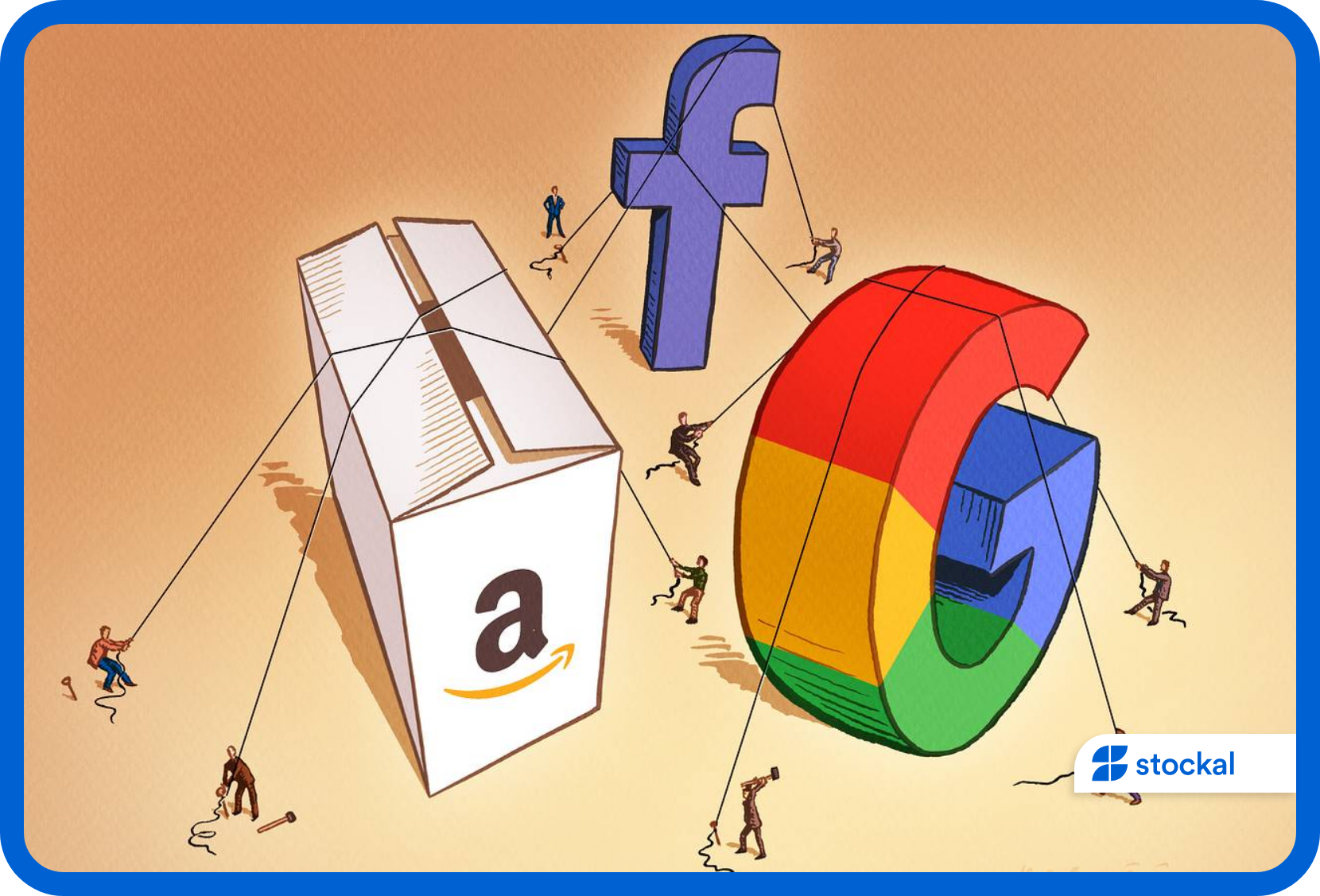 Earnings for Big Tech stocks concluded with cheers among investors after Amazon (AMZN) and Google’s parent company, Alphabet (GOOGL) returned blockbuster quarterly results. The first week of February tested investors’ patience – showing them the most volatile side of the market. In the same week, while Meta Platforms (FB), lost over $230 billion in a single day – the worst market value wipe-out till date, Amazon set a record for the biggest one-day rise in market cap.

Amazon’s $190 billion gain exceeded Apple’s $181 billion single-day increase in value after the iPhone maker posted record quarterly results. Alphabet’s shares also raced towards the highly coveted $2 trillion valuation, following an upbeat earnings release, but ended a little shorter at $1.97 trillion at the close of its best session in two years. Strong results from tech biggies are testimony of the sector’s ability to build over the pandemic boom. Despite a few hiccups, investor confidence is restored in the sector, setting a positive tone for 2022.

Alphabet rallies on the back of strong earnings growth

Alphabet has been the big winner from 2021’s top-performing Big Tech companies. The stock has given returns of over 65% to its shareholders in 2021 and outperformed the S&P 500 index’s returns of 27% in the same period. The company has exceeded analysts’ estimates in its quarterly earnings and revenues, shaking off investor concerns about the ongoing impact of the pandemic and the supply chain disruptions. The stock was higher by over 7% post the earnings.

Google relies heavily on its advertising revenues which were higher during the quarter. The robust ad revenues imply the overall demand for the company has remained healthy amid the supply chain disruptions and uncertain macro environment.   The majority of the company’s revenues came from Google advertising which includes sales from Google Search, YouTube ads and Google Network ads. The total ad revenue grew to $61.2 billion in Q4 2021 (higher by 33%) up from $46.2 billion in Q4 2020. Another area of strength during the quarter, is the Google Cloud business which competes directly with Amazon Web Services (AWS) which generated revenues of $5.54 billion – a jump of 45% from a year ago. The management also expressed that the company saw a 65% year-on-year growth in the number of cloud deals worth over $1 billion.

Several large banks and analysts’ have increased their price targets higher for Alphabet post its quarterly results with an “outperform” and “strong buy” ratings with 20-40% upside from the current levels by some of the key analysts.

Amazon, keeping in line with its consistent topline and bottomline growth reported an upbeat Q4 earnings and the stock was up almost 14% post the results.  The online retail behemoth logged in $11.8 billion worth of pre-tax valuation gain from its investment in Rivian Automotive (RIVN) that made a blockbuster market debut in November, 2021. Amazon had bought a 20% stake in the electric truck maker in 2019, extending Jeff Bezos’ rivalry with Elon Musk from space exploration to EVs.

Amazon however missed its quarterly revenue as per market expectations as the company struggled with labour supply shortage and inflationary pressures amid rising number of omicron cases. In its first single-digit revenue growth since 2017, Amazon’s fourth quarter sales grew 9% to $137.41 billion.

Exhibit 3: Amazon’s sales and net income growth over the years

Reports advertising revenues for the first time during the quarter

Amazon announced its ad revenues for the first time during the quarter which grew by 32% year-on-year to $9.7 billion, which was previously reported as “other business segment” revenues – which is more than its subscription revenues. The company has already gained success in attracting businesses to its advertising revenues and now stands third in the U.S. after Google and Meta for gaining ad revenues. Google reported Q4 ad revenues of $. 61.2 billion and Meta stands next with ad sales of $32.6 billion for the quarter.

Amazon turning into an advertisement giant?

Though not synonymous with advertisements, Amazon is growing its ad business by leaps and bounds. So much so that it booked $31.2 billion in ad sales in 2021 – more than the combined ad sales of its rivals Microsoft, Snap and Pinterest in the year. “Sponsored Ads” for products have been a ubiquitous part of Amazon’s shopping experience.

Cloud computing gained momentum during the pandemic as even small businesses moved operations online. Despite the economies opening up across the world, remote working and collaboration are here to stay. As per Synergy Research Group, Amazon Web Services (AWS) occupies the largest share in the $150 billion cloud market. With a 32% share in the cloud infrastructure market (in Q1 2021), that is bigger than the combined market share of its rivals Google and Microsoft Azure, Amazon is very comfortably placed to harness this tech boom. During the quarter, the cloud business was on a bright spot with revenues from the AWS coming in higher by almost 40% to $17.8 billion on the back of higher demand for cloud infrastructure and storage solutions.

AWS business was the sole contributor to Amazon’s operating income as the North America and International segment reported operating losses in the quarter. While margins for retail business are squeezed under cost pressures, AWS offers higher margins. AWS makes money from providing cloud storage, remote computing, security and networking among others. Today, AWS is the preferred cloud services provider for big organisations like Nasdaq, Facebook parent Meta, Pfizer and even the smallest of the startups.

The logistics costs that are growing faster than the total sales are one of the biggest challenges for the everything store. While revenue grew almost 20-fold between 2009 and 2021, logistics costs climbed 40 times in the same period. Fuel prices have pushed transportation costs higher whereas increased wage rate has risen fulfillment costs. No wonder, the share of logistics costs more than doubled to 32.3% of net sales since 2009.

Factoring in the rising costs of inputs – from fuel to food to labour – Amazon announced Prime membership fee hike for the first time since 2018. The annual subscription fee is raised to $139 from $119 earlier, in the United States. Despite a 15% year-on-year growth in subscription revenue, sales from Prime membership and digital content services shrank marginally in the fourth quarter to $8.12 billion, from $8.15 billion in the third quarter. This way, Amazon is looking to make an extra buck, believing customers will pay for the wide range of features like Prime Day sale, on-demand audio/video content streaming, same day delivery and so on.

Amazon’s Chief Financial Officer, Brian Olsavsky noted that challenges arising out of labour constraints have spilled over to the first quarter of 2022 from last year. He added that Amazon’s operating leverage decreases in comparison to prior year periods as the company reaches more normal fulfilment capacity. With most of the countries doing away with pandemic-related restrictions, it is yet to be seen if consumers stick to the lockdown-induced online shopping behaviour or turn to offline purchasing. Despite the cost and labour headwinds, Amazon will remain one of the most desirable stocks with its strong fundamentals, a lion’s share in retail sector and cloud services and an accelerated growth in ad sales.