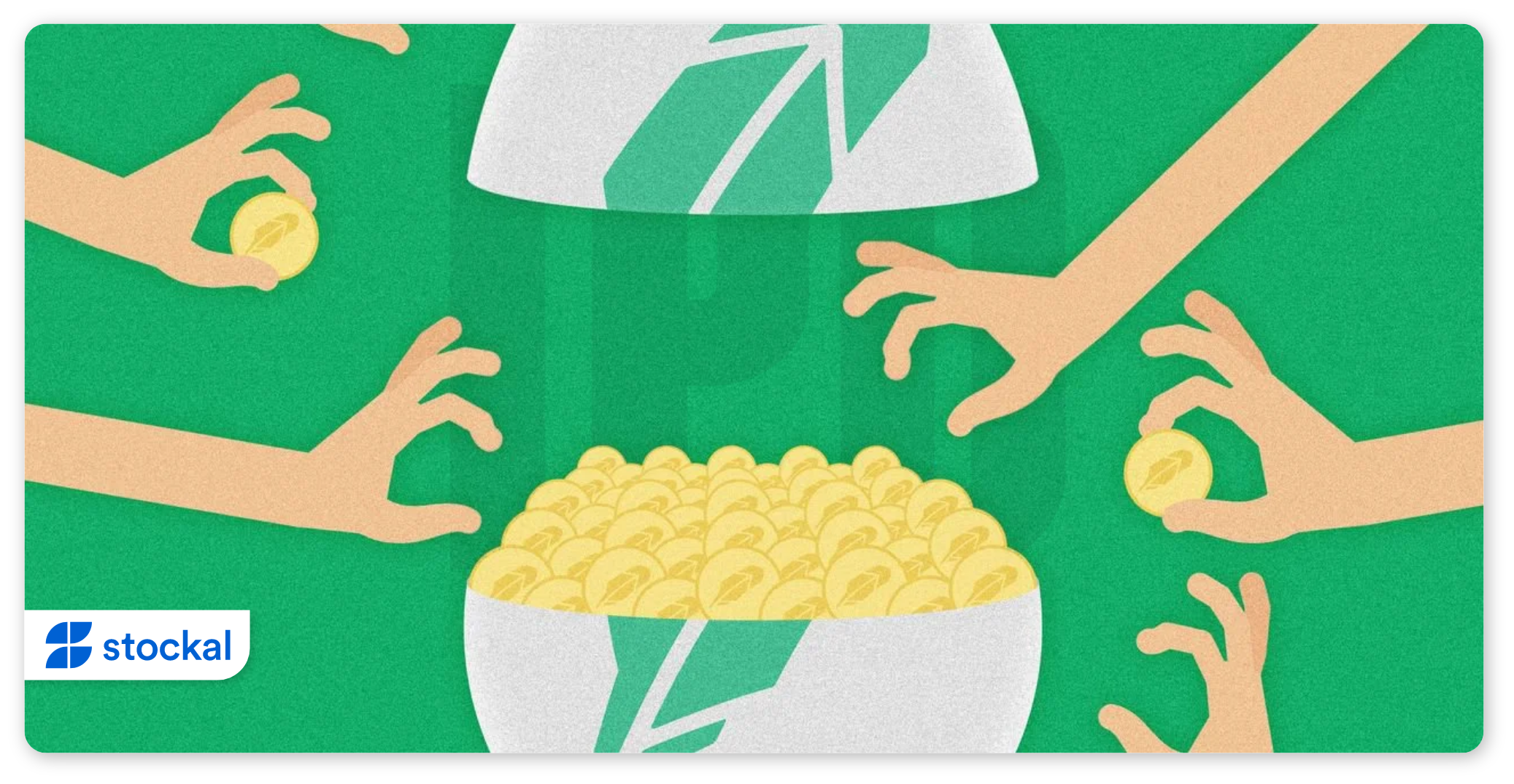 Robinhood, the new face of investment that is most talked about on Wall Street, announced its plans to go public through the Initial Public Offering (IPO) route. The renowned zero-commission trading platform, founded in 2013 by two Stanford alumni Vladimir Tenev and Baiju Bhatt, with an aim to provide financial trading access to every individual in the U.S. has helped over 12.5 million Americans take greater control of their financial lives. The company plans to list on the Nasdaq with the ticker “HOOD” on July 29th and nearly 50% of all new U.S. retail accounts activated in the last 5 years are on its platform. It is one of the most anticipated IPOs to date after a group of retail investors attempted to blow out some of Wall Street’s top hedge funds, by investing in GameStop (GME) stock through the platform.

The new wave in the digital world

The pandemic has changed the investing style of many retail and new investors in a world where Crypto.com is beating Wells Fargo. Chime is ahead of Bank of America and Robinhood is beating out Chase. Investors are no longer looking at a big bank or an advisor to handle their portfolios when they have options like Robinhood to access the markets and are supported by digital wallets for mobile banking. A look into the company’s IPO filings paints a clear picture of keeping to its mission to “democratize finance for all” that has ushered in a new generation of investors, unlike the traditional brokerage firms.

How does Robinhood make money?

Robinhood does not charge any money for the trades which take place on its platform instead it makes most of its revenues by routing customers’ equity, option and cryptocurrency trade orders to the big Wallstreet trading firms like Citadel Securities rather than to the New York Stock Exchange (NYSE) or Nasdaq. These trading firms in return pay Robinhood a fee for the flow of orders or executed orders which are called “Payment for order flow” or PFOF. The transaction-based revenue segment is the key revenue driver for the company and accounted for 75% of the total revenues in 2020 and 81% of the total revenues in Q1 2021. (Exhibit 1)

This includes interest revenues earned on security lending transactions, on margin loans and on cash and cash equivalents.

Key takeaways of the IPO and the company financials

The company’s top Shareholders include venture firms like DST Global, Index Ventures, New Enterprise Associates and Ribbit Capital. Each of these companies owns more than 5% of the company. Additionally, the company has raised $5.6 billion in funding which is valued at $11.9 billion as per the Pitchbook report.

2020 a turnaround year for Robinhood

The company saw unprecedented growth at the start of the pandemic; largely driven by millennials and Gen Z investors who increasingly saw huge opportunities in the beaten-down and Meme-stocks. The increased number of retail participation on the platform was anything but smooth as the company’s trading app crashed three times in a single week when markets saw a free fall and trading halts in early March 2020 at the start of the pandemic. However, these turbulences didn’t stop the retail traders from placing their orders which is quite evident in the company’s revenue and active user growth in 2020 (Exhibit 2). The graph below with key performance metrics of Robinhood shows exponential growth in revenues and net profit in 2020 as against the losses in the previous years.

Over 80% of the company’s revenues are generated from transaction-based revenues coming in by way of Equities and options trading. The Average Revenue per User (ARPU) increased from $82.9 in Q1 2020 to $137 in Q1 2021. While Robinhood has been advantageous to new investors with limited capital by allowing fractional investing, that’s not its biggest business. Instead, it’s the speculative options trading that saw a huge uptick since the pandemic and in early 2021 among the YOLO (You Only Live Once) traders or the new generation traders who are willing to take that extra risk on cheap, about-to-expire stocks in options which are most talked upon on Reddit and Wall Street bets. (WSB)

Robinhood came under the scanner for its trading practices during the early days of the Gamestop (GME) and retail trading frenzy, when the company suspended trading of certain stocks. But these controversies didn’t seem to come in the way of the company’s growth when the company saw a whopping 5.5 million net new funded accounts in Q1 2021 adding to a total of 18 million funded accounts (Exhibit 4) and that’s the number which took the company almost 7 years to achieve previously between 2013-2019.

Revenues grew to $522 million with a growth of over 300% year-on-year in Q1 2021 which was mostly driven by Options and Equity trading on the platform. However, the demand for Cryptocurrencies increased during the quarter which contributed to 34% of the transaction-based revenues as compared to 4% during Q4 2020. Options trading added to 38% and Cryptos added about 17% of the total Q1 transaction-based revenues. The company saw a significant rise in Daily and Monthly Active Users (MAU) on the platform in Q1 2021. (Exhibit 5)

Exhibit 5: Daily and Monthly Active Users on the Platform

Robinhood has successfully penetrated the retail investing market with its platform receiving increased traffic than any traditional retail brokerage. The increased traffic is seen in January 2021, when the Gamestop saga occurred and this upward trend continued in February before slowing down in March. The platform received over 200 million visits each in both Q1 and Q2 as compared to its competitors. (Exhibit 7)

Monthly Active Users are also higher for Robinhood than its peers

When we look at the company’s Monthly Active Users (MAU) as compared to its close competitors like Webull, M1 Finance, TD Ameritrade or even Coinbase; Robinhood has seen multifold growth on its platform driven by retail traders. However, its scale of operations in terms of customers or assets managed is still small as compared to Big players like Charles Schwab or Fidelity who cater to institutional clients. Additionally, the company faces competition from several other new trading platforms that constantly attract investors with interesting features and gamification on the platforms.

The company saw a significant increase in the number of accounts opened by first-time investors in the first half of 2020. The company’s future profitability is likely to be elusive in times when the pandemic is behind us and people are most likely to spend less time looking at stock tickers on their app or closely watching the Reddit bets.

Increased revenues/volumes come with higher operational costs and Robinhood is no exception. Q1 2021 operational costs accounted for almost 88% of the revenues and the costs were up over 150% year-on-year to $464 million. Higher operating costs were attributed to increased costs involved with Technology, marketing spends and administrative costs which could likely impact the EBITDA and net income of the company going forward.

Data as of July 2021|Source: Bloomberg.com

Extremely volatile prices of the Cryptocurrencies

Crypto prices have been extremely volatile and make it difficult for traders to time the market. Bitcoins which are the most traded crypto on Robinhood’s platform by notional value was worth over $54 billion in Q1 2021 as compared to approximately $8 billion in 2018 when crypto trading was introduced on the platform. The total Assets Under Custody (AUC) attributed to cryptocurrencies is $11.6 billion at the end of Q1 2021 which is around 15% of the total Assets Under Custody (AUC) for the company. So, the volumes of these digital currencies are directly linked to the prices of the cryptos.

Revenues are linked to investor interest in Crypto and MEME stocks

The company’s crypto revenues and reliance on bubbles in some meme-stocks like Gamestop, AMC which burst retail investors in a short-squeeze frenzy earlier this year are directly related to the volumes of business of the company. Cryptocurrency trading on the platform was booming in Q1 with around 17% of total revenues coming in from transactions related to Cryptos. The company’s one-third of the revenue from the crypto-currency trading in Q1 2021 came from Dogecoin. If you look at the graph below showcasing the Robinhood app downloads (on the right axis) and the price of Dogecoin and the Gamestop (GME) (rescaled to fit on the left axis) during the first half of 2021; it shows that the app downloads around the time when Dogecoin prices soared and the same was the case during meme-stock rally like Gamestop. This explains that the investors bought Dogecoin when the prices were high and lost money. It is estimated that they lost about 40% of the money from Dogecoin’s recent rally when they entered at higher prices.

Data as of 2 July 2021|Source: Boundedfinance.com

The company has been in several controversies many times as criticism from regulators started mounting up when Robinhood agreed to pay more than $130 million in the recent past to settle accusations by regulators along with the most recent one of $70 million from the U.S. regulator FINRA.

Robinhood rode a wave of new user growth as the pandemic transformed the investing style of U.S. investors. The next generation of investors is a lot younger with a median age on the platform being 31 years and are more diverse than ever before. The prospects of no-fee mobile investing are probably what drove millions of investors to Robinhood and increased its brand image among retail investors. Robinhood’s listing gives 2021’s IPO market another boom with companies (including SPACs) that have raised more than $210 billion on the U.S. exchanges this year and makes it the busiest year on record for the IPO market.