Have you wondered which might be the strongest US stocks to buy now? Even though recession fears are intensifying due to Fed rate hikes, the US labour market demonstrates remarkable resiliency. The ratio of available jobs to job searchers is still nearly double. Despite the economy’s difficulties and the Federal Reserve’s campaign to contain increasing expenses by making borrowing increasingly expensive for consumers and businesses, the job market has been extraordinarily robust this year, recording monthly average gains of more than 400,000. To prevent being caught off guard when business picks up again, worker shortages have pushed many firms to keep hiring and avoid terminating employees. 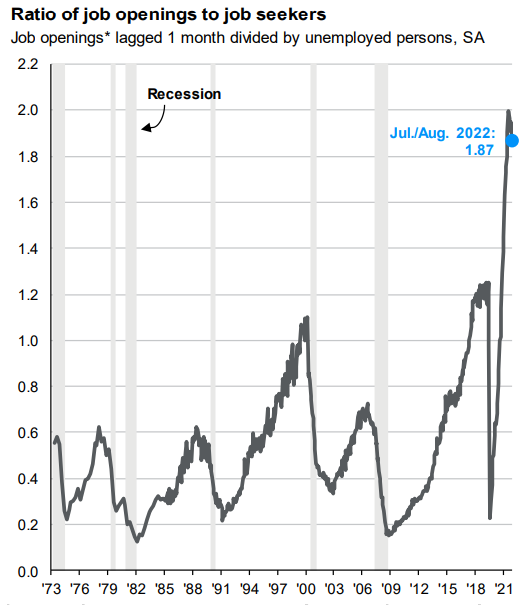 The decline in September indicates that finding workers might continue to be difficult, which would result in more significant wage rises. That would probably further drive inflation, which is already close to a 40-year high. Average hourly wages increased by 10 cents last month to reach $32.46. This slight increase brought the yearly growth down to 5% from 5.2% in August, which is still a significant increase. According to experts, the Fed’s decision to authorize a further significant three-quarter point interest rate hike in early November was likely influenced by the resumption of the participation reduction, the decline in unemployment, and the strong job growth.

Which are the Stocks to Watch Out For in This Environment?

As you look at the various options available while figuring out which US stocks to buy, you may take a look at the following:

Automatic Data Processing reported quarterly earnings totalling $1.86 per share, exceeding the $1.78 per share Zacks Consensus Estimates. This contrasts with earnings per share of $1.65 in the prior year, which makes it a reason for you to look further into its numbers and decide if it is among the US stocks to buy. These numbers have non-recurring expenses taken into account. A profits surprise of 4.49% is represented in this quarterly report. It was anticipated that the company would report $1.48 per share, but earnings of $1.50 were achieved, expressing a surprise of 1.35%. The business has outperformed the consensus EPS forecasts four times in total during the last four quarters.

For the quarter that ended in September 2022, ADP reported revenues of $4.22 billion, above the consensus estimate by 1.48%. In contrast, last year’s revenues were $3.83 billion. Over the past four quarters, the company has exceeded consensus revenue projections four times.

ExlService Holdings reported quarterly earnings of $1.54 a share, exceeding the $1.40 per share Zacks Consensus Estimate. Why would that make it among the strongest US stocks now? The quarterly earnings contrast with earnings per share of $1.30 in the prior year. These numbers have non-recurring expenses taken into account.

This quarterly report shows a 10% surprise in earnings. When EXLService posted earnings of $1.50 per share as opposed to the $1.33 per share anticipated, it came as a 12.78% surprise. The business has outperformed consensus EPS forecasts four times during the last four quarters.

For the quarter that ended in September 2022, ExlService Holdings, a company in the Zacks Outsourcing sector, reported revenues of $361.35 million, exceeding the Zacks Consensus Estimate by 4.52%. In contrast, last year’s revenues were $290.33 million. Over the previous four quarters, the company has exceeded consensus revenue projections four times.

American Airlines announced record third-quarter revenue while exceeding earnings projections. The company American reported earnings of $483 million, with 69 cents per share, as opposed to $169 million, or 25 cents per share, a year earlier. Analysts surveyed by FactSet predicted earnings of 54 cents per share. Wall Street had predicted $13.37 billion in revenue, but sales increased 50% to $13.46 billion. In addition, American Airlines reported that it generated more than expected revenue despite operating at a capacity that was 9.6% lower than in 2019.

More overseas routes are now available for leisure travellers on U.S. carriers. However, since working from home and videoconferencing trends aren’t going away, business travel may experience a long-term decline. Airlines have aggressively extended to new routes with an emphasis on locations conducive to outdoor activities due to the increased competition for leisure passengers. According to a research note published on July 5 by Citi analyst Stephen Trent, the leading three airlines—American, Delta, and United—had a cancellation rate of just 1% on July 4 with essentially complete data.

America had $14.3 billion in total available liquidity at the end of the third quarter, which included cash and short-term investments in addition to undrawn capacity under a revolving and other credit facilities. The company’s top aim is to reduce total debt, and it is scheduled to do so by the end of 2025 by $15 billion. The business paid $380 million in planned debt and financing lease payments in the third quarter. America has cut its overall debt by $5.6 billion since September 30, 2022, from its peak levels during the 2021 second quarter.

Salesforce uses a subscription business model to sell software. Its software aids in the management of customer interactions and sales activities for enterprises. The business now offers marketing, e-commerce, and data analytics services. Investors are not fully appreciating Tableau’s shift to a subscription-based business model, according to analyst Kash Rangan, while Mulesoft should continue to create revenue and operating margin synergies. Rangan predicts Tableau and Mulesoft may increase fiscal 2023 sales by up to $5 billion and help Salesforce improve its analytics market share to 20% from 3%.

The release of Salesforce Customer 360 products, anticipated regulatory approval of Tableau, Salesforce integration from European regulators and Salesforce’s investor day on November 20 are all fourth-quarter catalysts for the company. CRM stock currently has a “buy” rating and a $200 price target from Bank of America.

In an all-stock transaction, Salesforce paid Tableau Software $15.7 billion last year to acquire the data analytics company. For a software company, the company spends a comparatively high 14% of its revenue on development and research. Software engineer wage inflation and increased hiring have also hampered margin growth.

Following the pandemic’s disruption to its operations, Disney is still making progress in moving forward. Revenue rose 9% to $20.5 billion in Q3 2022 (which ended Oct. 1), although it was significantly less than Wall Street had anticipated. However, there were also other very obvious growth indicators. Parks have excelled, and operating income climbed by more than 100% while sales increased by 36%. According to ex-CEO Bob Chapek, demand is outpacing park capacity, which is a solid indicator of ongoing development in this market. This occurred despite Shanghai park being closed for a portion of the quarter.

In Q4, the streaming market showed astronomical growth. 12.1 million of the 14.6 million new subscriptions were for the Disney+ premium network. More than 235 million are included in the total, including 164 million for Disney+. It will likely reach 230–260 million Disney+ customers by 2024. Direct-to-consumer (DTC) segment revenue climbed 8% over the previous year. Disney maintained its goal for Disney+ to turn a profit in 2024 and put cost-saving measures in place to better manage the DTC content investment. In December, it will introduce an ad-supported tier that it expects to be a reliable and less expensive source of revenue. For the launch, it has agreements with 100 advertisers and an extensive network of 8,000 advertisers with whom it is connected through its various content channels.

The stocks mentioned above are part of the tech and aviation sectors. If you are figuring out which US stocks to buy, Stockal could help you find an answer. Suppose you are considering investing in a certain sector as a whole without bothering about individual company performances. In that case, you may look at the ETFs and Stacks provided on Stockal’s platform. Stockal has an easy-to-navigate platform that would help you figure out which US stocks to buy now by providing the latest data and information on the same. The Stacks on Stockal are curated after proper research and analysis, which could break things down more straightforwardly for you to decide which US shares to buy.