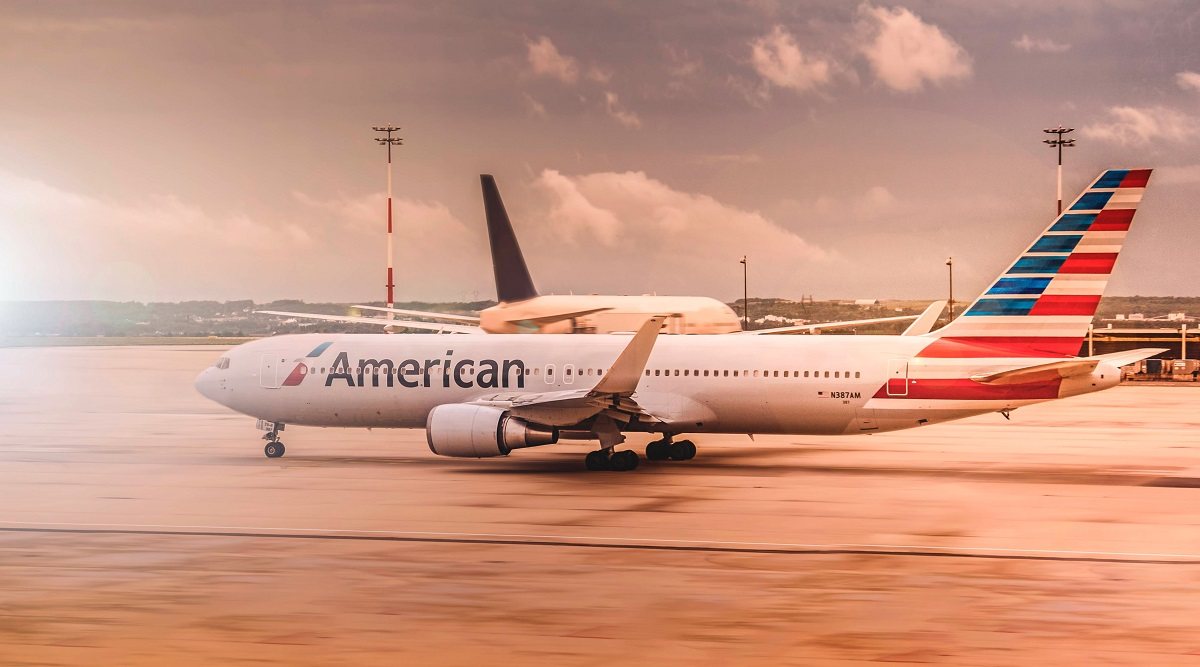 If you are eager to learn about US airline stocks’ performance, note that the nation currently holds an 18.79% market share worldwide. The second-largest economy in the world, China, is anticipated to grow at a CAGR of 15.9% throughout the analysis period to reach an expected market size worth US$142.8 billion by 2026. Two other significant geographic markets are Canada and Japan, with rates of growth of 10% and 9.7%, respectively, expected for each throughout the length of the investigation. To determine the best US stocks to buy, keep reading about US airline stocks.

As the recovery speed from the COVID-19 crisis quickens, the International Air Transport Association (also known as the IATA) updated its forecast for the airline industry’s performance in 2022. Features of the estimates should give you a better idea based on which you may make a US investment:

The only region to return to profitability in 2022 will be North America, which is predicted to remain the region with the best performance, which is a plus for US airline stock. In 2022, net profit is anticipated to reach $8.8 billion thanks to the sizable US domestic market and the reopening of overseas markets, notably the North Atlantic. Demand is anticipated to be 95.0% of pre-crisis levels in 2019, while capacity will be 99.5%.

Passenger traffic is to grow by leaps and bounds going forward

Total passengers between the US and the rest of the globe, including Foreign Flag Airlines, decreased even further in 2020 and recovered less in 2021 than US carriers alone. Without the relative support of their own markets, foreign airlines were compelled to reduce capacity further, sacrificing passenger flow.

In 2020, the number of passengers fell by an anticipated 73.4 % to 67 million, with losses reported across the board, with the Atlantic area losing the most by 80.4 percent. The Pacific and Canada Transborder areas continued to see reductions in 2021, and all regions remained far below 2019 levels. In contrast, the Latin American and Atlantic regions had significant gains from the previous year.

Total passenger growth rates in the prediction’s early years are substantial, returning passenger traffic to 2019 levels in 2024. The anticipated growth of global passengers of 7.7% a year, as levels expand nearly fivefold from 99 million in 2021 to 470 million in 2042, is based on the moderate global economic growth of 2.8 percent a year over the following 20 years. 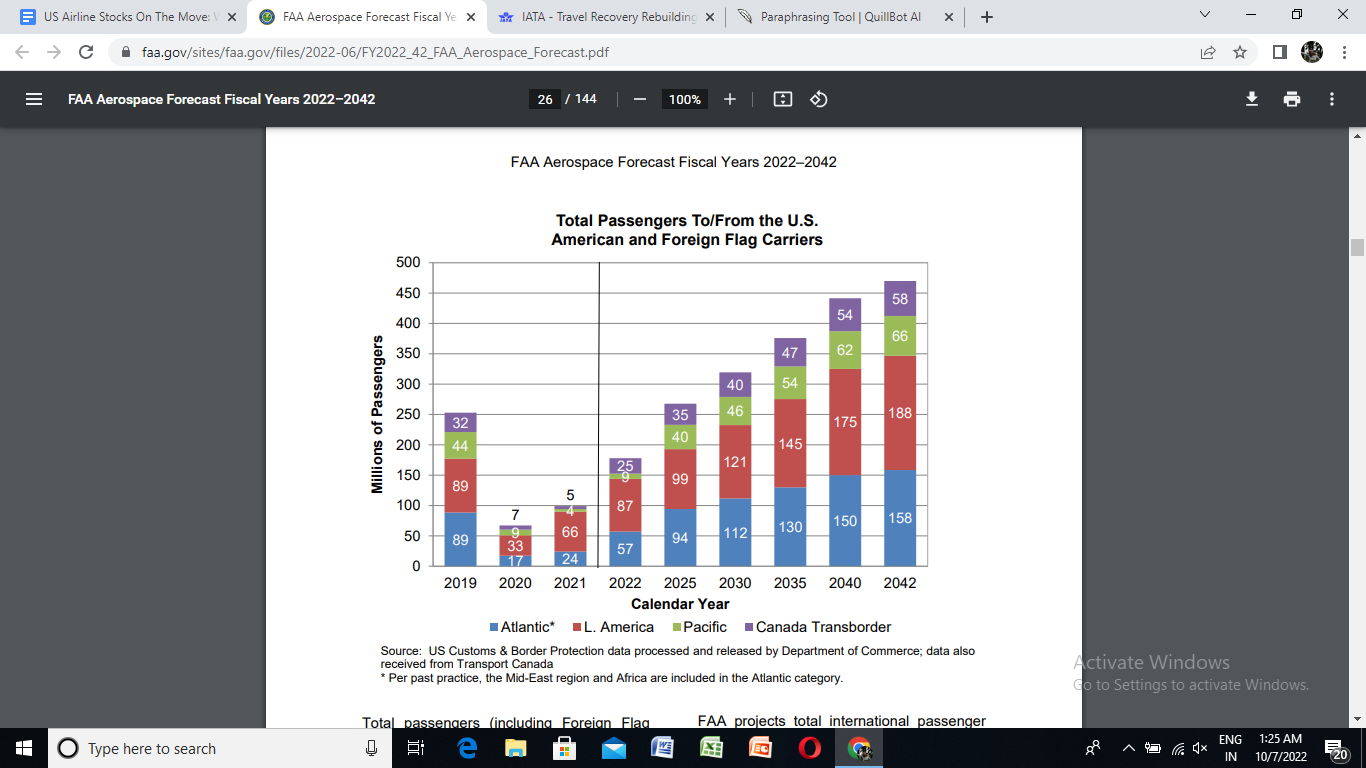 USA to have airlines with the best financial results for 2022

The following table will give you detailed data to understand the functionality of the US airline stock:

Note that the data above includes all the commercial airlines and excludes large non-cash costs and bankruptcy recognization. The historical data is subject to revision and was last updated in June 2022.

The three largest airlines in the United States – American, Delta, and United – suffered bigger revenue losses during the global economic crisis than the discount carriers JetBlue, Southwest, and AirTran. 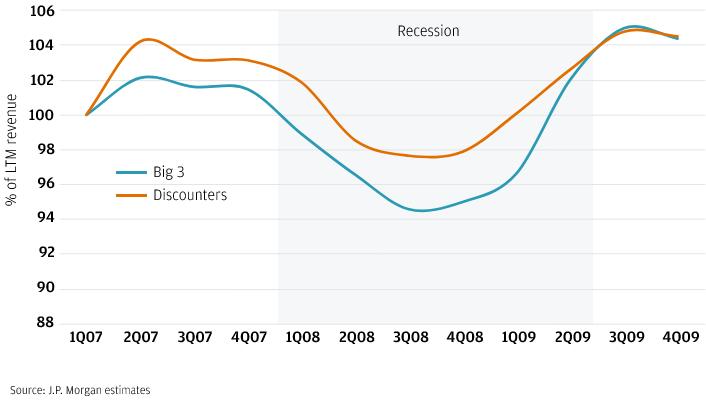 However, too much capacity leads to intensifying competition

Although demand for air travel hasn’t yet returned to pre-epidemic levels, there is still the possibility for growth, and investors’ worries about a probable economic slowdown or recession have persisted. Although not near pre-pandemic highs, Cowen’s data shows that short interest in the group increased during the second half of August.

The problem with capacity is that it could make it difficult for airlines to meet demands in times of crisis. In less popular times, however, this can be relatively inelastic, which means it can easily go to excess and possibly spark fare wars.

What are the popular Airline Stocks?

If you are wondering which are the US stocks now when it comes to the airline industry, here is a list of US airline stocks that you may pick from:

Southwest Airlines began as the first inexpensive airline, but it is no longer a maverick start-up but one of the industry’s heavyweights. The Dallas-based airline is still the only significant carrier that has never had to file for bankruptcy. Thanks to its streamlined operations, it consistently profits even when its competitors are having trouble. While attempting to restore its schedule, the airline has encountered some labor issues, but Southwest has proven its ability to operate over the years despite setbacks. Southwest has the best balance sheet in its sector, and investors appreciate it because of its resilience.

Much of the industry’s recent innovation has been driven by this airline. When it bought Northwest Airlines in 2008, Atlanta-based Delta started a wave of mergers that helped the industry stabilize. Since then, it has revised its prices to compete better with discounters. Delta even purchased an oil refinery to ensure its access to the supply of jet fuel. The competitors of Delta always follow. As one of the first international airlines to recover fully after the pandemic, Delta has a healthy financial sheet and good worker relations.

Along with a vast network throughout Asia, the United has sizable operations serving Silicon Valley, the American energy industry, and other niche markets. Due to the extremely cyclical nature of these markets, United’s performance may fluctuate with the tech or energy sectors. United has had an extensive presence in important business markets and its capacity to provide unmatched connections to business travelers.

Since merging with US Airways in 2015, America has become a more traditional brand under new management while also adopting a more discounter mentality. The massively networked airline, with its headquarters in Fort Worth, has close relationships with significant European partners. However, America has had a harder time recovering from pandemic-related problems because it is the airline with the greatest debts and a route network designed for international travel.

How does Stockal help?

Stockal offers exchange-traded funds (such as the US Global Jets ETF) and allows you to access direct US investment apart from thematic funds for the airline sector. If you are interested in US airline stock, go to Stockal and look at the available US stocks now.