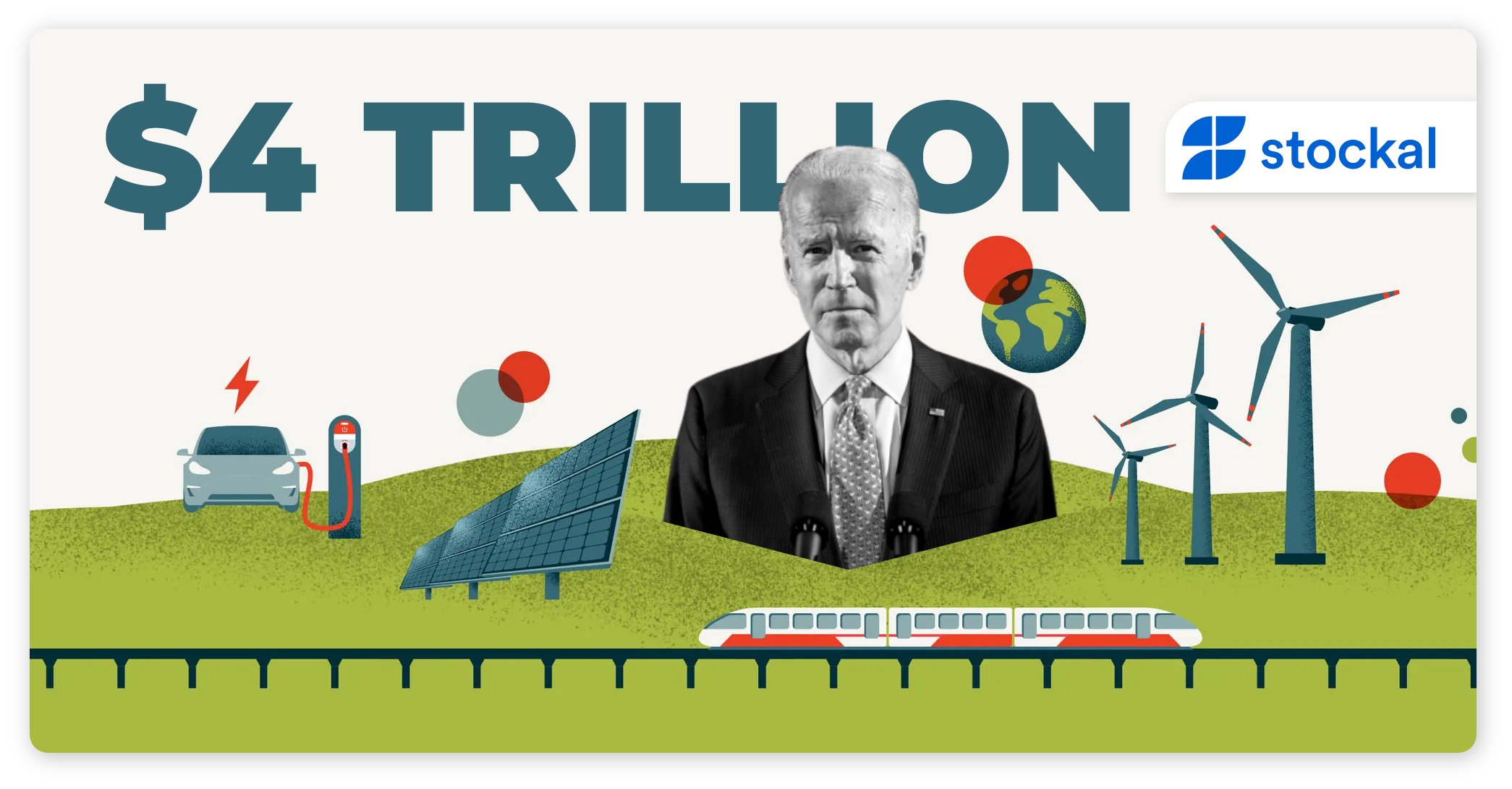 After the successful vaccine rollout and the $2 trillion Covid-relief bill, the United States’ next big step to economic recovery has now shifted focus to the massive $4 trillion Infrastructure and Families Plan announced last week. The second portion of Biden’s economic plan involves a $1.8 trillion budget dedicated to childcare, family support and education, over and above the $2.3 trillion infrastructure plan released at the end of March.  To compensate for the huge Infra spend  Biden aims to raise corporate taxes for the next 15 years along with the hike in capital gains taxes to tax wealthier Americans. The bill has now moved to the hands of the congress and sees positive prospects as it is receiving overwhelming bipartisan support.

Sectors Benefiting From The Plan

Analysts at Morgan Stanley identify  3 sectors which are set to be the biggest beneficiaries from the plan. Here is a detailed look at the top 3 sectors:

ESG funds allocate their finances in many ways to promote social good. They invest in clean energy firms that demote fossil fuel usage, and also promote companies that are propagators of racial and gender diversity.

To invest in ESG friendly companies, check out our ESG leader stack with a CAGR of 32%  available on our platform.

Building and upgrading roads and bridges would require construction equipment and materials like cement, steel and other auxiliary materials. Due to this, the obvious beneficiaries of Biden’s infra boost  are steel and cement companies. This sector is also likely to  benefit from the prospects of rising inflation faced by the country. Additionally, the infra spend is anticipated to increase the demand for cement by over 200 million tons.

Healthcare will see a boost from  Biden’s Families Plan. This includes the expansion of affordable care act subsidies and a possible lowering of the Medicare age which is all beneficial for large healthcare providers. With a $1 trillion spend dedicated to transportation, water and affordable housing, this sector also seems to benefit from an “infrastructure supercycle”.

Some of the direct beneficiary companies in these sectors include:

Oshkosh (OSK): is the direct beneficiary of the electrification of the federal vehicle fleet, including the trucks used by the U.S. Postal Service. The company recently won a contract for producing 165,000 new mail trucks of which a significant percentage will be electric vehicles. However in contrast, electric vehicle maker Workhorse Group (WKHS) has contested the contract in the court.

Freeport-McMoRan (FCX): This copper mining company is one of the leading mining companies  in the US. As copper is a critical commodity in building and construction, this company is set to be one of the main beneficiaries from the infra plan. Approximately 43% of all mined copper is used in building construction and another 20% is used in transportation equipment. Additionally, electric vehicles use about four times as much copper as traditional internal combustion vehicles and renewable energy sources like solar and wind use more than four times as much copper as good oil and gas segments. Hence, the company is set to benefit from the copper demand going forward.

Eaton (ETN): Eaton is a major supplier of electrical components and systems. Even though it is not a pure play green energy company, wind and solar farms need to be integrated into the national grid of the United States, and that is where Eaton benefits. Additionally, investors are benefitted from having this stock in their portfolio as the company is known to be paying dividends to its investors every year since 1923. With focus shifting to long-term infra play, the company is likely to receive a positive outcome by virtue of the infra spend.

Chargepoint Holdings (CHPT):The existing electric vehicle charging stations in the country will be increased by at least 4-5 times from the current 115,000 gas stations if Biden aims to take leadership in the electric vehicle space against China, and has proposed a $174 billion investment towards this move. The company is a direct beneficiary of grants and incentives by the government as Chargepoint builds customized charging stations and has delivered more than 90 million charges and claims 60% of the Fortune 50 companies as their clients in this space.

Nucor Corporation (NUE): Nucor is the largest domestic steelmaker in the U.S. The pent-up demand for automakers and other industrial buyers coming out of the pandemic have boosted demand for the company. Added to this is the Biden’s Infra plan which the company is a direct beneficiary of as building of roads and bridges adds up to the steel demand for the company. Additionally, shares of U.S. Concrete (USCR) have also seen a rise post the Biden’s spending announcement and the stock is up 62% in 2021.

Amedisys (AMED): The Biden administration has proposed $400 billion to improve the home healthcare industry for the aging population and those with disabilities. This is likely to boost demand for home health providers like Amedisys which works with helping aged patients by providing personal care and health services in the patients’ homes. Also, the Company gets over 70% of its revenues from the government payers such as Medicare so the Federal funding is likely to directly impact the revenues of Amedisys.

Here are some ETFs that are gaining traction from these large spending plans:

Added to this, construction and building material companies like Martin Marietta Materials (MLM), and Vulcan Materials (VMC) are also to gain from the infra plan. Renewable Energy companies like First Solar (FSLR), NextEra Energy (NEE) are direct beneficiaries of the spend as well.

The new infra plan that sets to “Build Back Better” strengthens Biden’s mission to revitalize the U.S. economy leaving no stone unturned. With his emphasis on renewable and green energy, healthcare and modern infrastructure, Biden’s infra boost is bound to create an improved, environmentally safe and sustainable economy for the country, making for an astounding comeback from a devastating pandemic.