President Joe Biden has waged war against surging inflation, mounting fiscal deficit and increasing carbon emissions by signing the Inflation Reduction Act of 2022 (IRA) into law. The legislation aims to lower the cost of energy and prescription drugs for millions of Americans burdened by rising prices. Here is an analysis of the various provisions of the act and their impact on U.S. companies and the overall economy.

While the IRA would reduce the budget deficit by over $300 billion through 2031, much of the savings would take time to accrue. The Committee for a Responsible Federal Budget estimates that the act will reduce deficits by $1.9 trillion over the next two decades, including interest savings. 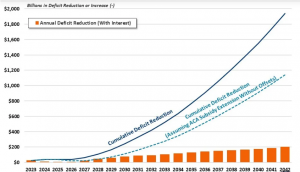 The largest ever climate package in the U.S. history

The IRA presents the largest ever climate package in the history of the United States, offering $369 billion in climate-focused investments. The act aims to reduce carbon emissions by roughly 40% by 2030.

Besides being naturally good for the environment, renewable sources of energy can also help fight inflation. Firstly, fossil fuel commodities are highly influenced by global market forces. Crude oil and natural gas prices have been very volatile this year due to the geopolitical crisis in Eastern Europe. Secondly, renewable sources like wind and solar are free once projects are completed. Thus, low-cost renewables can help reduce electricity bills and also save consumers from global oil price shocks. As solar and wind energy deployment in the United States increased through the 2010s, their costs have fallen more than 85% and 60%, respectively, over the same time. 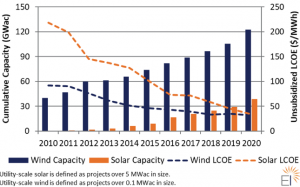 IRA provides for a 10-year extension of wind and solar credits which were scheduled to phase out over the next few years. The act incentivises domestic manufacturing as the United States has been import-dependent for solar panels and equipment. Companies investing in battery storage, nuclear energy, hydrogen energy, biofuels and carbon-capturing technology will also get a boost from the climate package. Top potential beneficiaries include SunPower (SPWR), Plug Power (PLUG) and First Solar (FSLR). In the short term, investments in solar companies may struggle due to rising interest rates. But with the increasing focus on clean energy, the investments should pay off in the long term.

A push for domestic EV production

Before the IRA, the old tax credit offered $7,500 to new EV buyers until the manufacturer hit a 200,000 sales cap. Effective immediately under the IRA provisions, the EVs must now be assembled in North America to qualify for the tax credit. This new clause bars some popular South Korean EVs manufactured by Hyundai and Kia from availing the tax credit.

However, starting January 1, 2023, the current manufacturer sales cap of 200,000 EVs will be removed, allowing Tesla (TSLA) and General Motors’ (GM) electric vehicles to qualify for the tax credit. But price caps of $55,000 for new cars and $80,000 for trucks, vans and SUVs will prevail. Moreover, buyers would also get a tax credit of up to $4,000 on used EVs.

The Electric Vehicles Stack is a pre-curated portfolio of companies involved in EVs, autonomous vehicles, battery storage and general clean technology. Top holdings include Tesla and Plug Power, among others.

To combat China’s dominance in EV battery manufacturing, the IRA laid down strict battery supply rules to avail full EV tax credit. While one half of the tax credit is determined by battery minerals, the other half is based on battery components. To get full tax credit, eligible new EVs must have an increasing share of battery minerals and components sourced from North America.

Exhibit 9: Worldwide Lithium Demand by Use 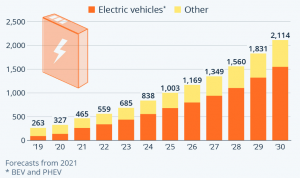 The incentives laid out for electric vehicles are expected to benefit the entire EV supply chain, hence creating further upside potential for lithium producers as well. In fact, EVs are expected to drive global demand for lithium carbonate to 2.1 million metric tons by 2030. According to Dave Sekera, Morningstar’s Chief U.S. Market Strategist, the IRA bolsters “our current view that the lithium market will remain undersupplied throughout the rest of the decade, which will push prices well above the marginal cost of production.”

Americans pay much more for medications than the citizens of other OECD countries. In order to make healthcare affordable, the IRA limits out-of-pocket drug costs to $2,000 per year for Medicare beneficiaries. On top of this, the package requires pharma companies to pay rebates if Medicare drug prices rise faster than inflation. Pfizer (PFE), AbbVie (ABBV) and Amgen (AMGN) are some of the companies that are known for large annual price hikes.

Exhibit 14: Per-Capita Expenditure on Pharmaceuticals in Select OECD Countries in 2019 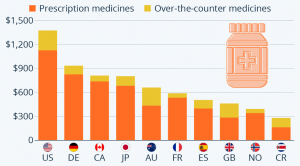 The IRA also allows the Federal government to negotiate prices of certain high-cost prescription drugs. While the exact impact of the legislation on the healthcare sector is not clear, firms with the highest exposure are those with high-priced medicines for the elderly like AbbVie, Pfizer and Bristol-Myers Squibb (BMY). Higher volumes under the expanded Affordable Care Act should offset reduced drug prices. However, biotech and pharma giants may cut their research and development costs due to lower drug prices, which may hamper future innovation in the sector.

To pay for the aforementioned provisions, the IRA introduced a 15% minimum tax on corporations with over $1 billion in income and a 1% excise tax on stock buybacks. In 2020, 55 of the wealthiest U.S. companies paid $0 in federal income taxes. About 150 companies; mostly in growth sectors like Tech, Communication Services and Consumer Discretionary, and Healthcare; could be impacted by the minimum tax. These sectors may face earnings per share headwinds of around 1-2% while the net earnings impact on the overall S&P 500 is estimated to be nearly 1%, as per JP Morgan.

Due to the buyback tax, companies may prepone their share repurchase plans to this year before the tax is implemented. Moreover, companies may find paying dividends more tax efficient than repurchasing shares. This could drive more investor focus towards dividend stocks. The act also invests $80 billion in the Internal Revenue Service over the next decade to strengthen tax enforcement and collection.

The Inflation Reduction Act touches upon a wide range of areas, from climate action to corporate taxation to healthcare expenses. But the title is a misnomer since the act does very little to actually reduce inflation in the near term. Reduction in energy costs through tax credits will not happen overnight and prescription drug costs will not come down until 2026 when the renegotiated prices are implemented. In addition, the deficit reduction target is merely a drop in the ocean. However, the act is a strong boost to the clean energy sector as it encourages investment in sustainability themes like renewable energy, green real estate, clean infrastructure and battery storage.

Investing
Unsure about Direct Investment in the US? Stack Up With Stockal!
November 28 2022
Other Categories