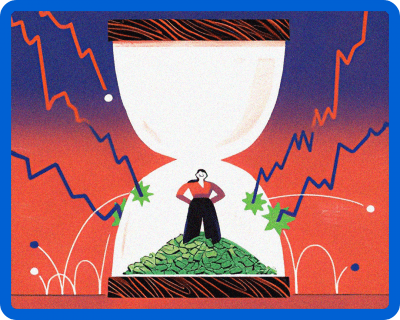 Season’s greetings! We hope you and your loved ones are basking in the festive spirit.

This year was marked by a myriad of emotions for Wall Street investors — from shock to awe to joy to apprehension. Yet, the most befitting word for 2022 would have to be ‘uncertainty’.  The year 2022 saw investors battle multi-layered challenges as geopolitical tensions, decades-high inflation, and pocket-pinching hikes in interest rates led to fears of a substantial recession ahead.

This uncertainty was reflected in the market’s performance. Wall Street’s major indexes shed between 10% and 33% on a year-to-date basis so far in 2022.

On a sectoral basis, energy shares were the big winners, cashing in on a stellar rally in crude prices. The sector’s gains touched almost 50% during the year. On the flipside, communications and technology stocks, which include Big Tech companies, emerged as significant losers with the S&P 500 Communications Services (SP500-50) index losing about 41% during the year, reflecting the rout in tech and value stocks.

How did we end up here?

The Ukraine crisis: While the COVID-19 dust began to settle in early 2022 elsewhere, a major geopolitical development — Russia’s invasion of Ukraine in late February — snowballed into multiple crises. Reports called the invasion the biggest attack on a European state since World War Two.

Oil surges to almost $140: The Russian invasion and the resultant sanctions, a surge in demand after the pandemic, and output cuts by oil-producing nations — all formed a lethal combination to squeeze out supplies. As a result, oil skyrocketed to almost $140 per barrel in March but later receded to steady at around $80 levels.

Inflation burn: How do expensive energy prices impact you? It burns a bigger hole in your pocket. Higher fuel costs pushed up prices of essential goods across the country, causing the inflation rate to sharply rise and touch a 40-year high. It recently showed some signs of easing.

The Fed steps in: The runaway inflation forced the Federal Reserve to raise interest rates despite an imminent recession threat it posed.  The central bank undertook about seven rate hikes in a span of nine months, which this report says was unheard of since its last inflation fight in the 1980s.

Big Tech’s big slide: The dream run for the likes of Microsoft (MSFT), Facebook-owner Meta (META), Alphabet (GOOGLE) and Amazon (AMZN), among others, came to a grinding halt as they resorted to cut excessive hirings and braced for an imminent recession. Here’s a look at the targeted job cuts likely at these firms.

The Crypto saga: Cryptocurrencies couldn’t buck the trend of weakness either. Their combined market value was less than a third from the peak of $3 trillion in November 2021. Among other factors, the collapse of Sam Bankman-Fried’s FTX exchange last month served as a major drag.

Amid the sombre and subdued mood, some companies looked to consolidate via mergers and acquisitions. Here’s a look at major deals in 2022. 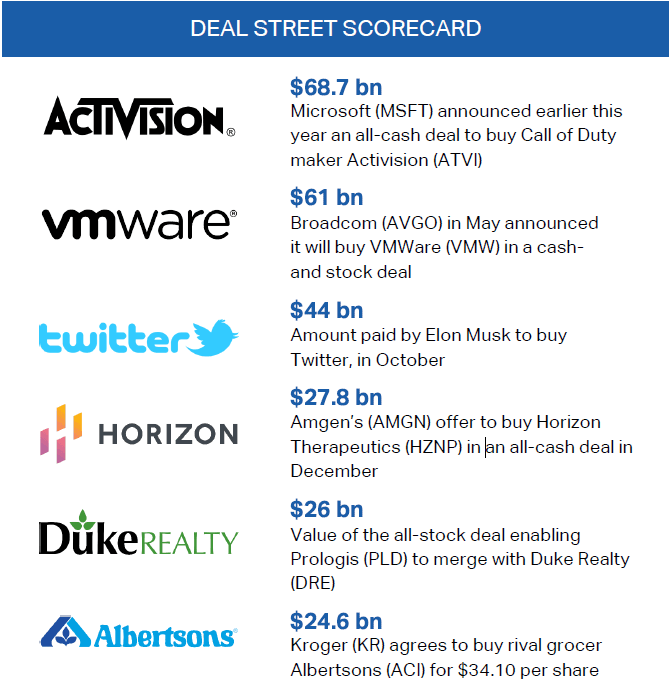 Market Outlook: Analysts are expecting another year of muted performance by Wall Street. This report quotes Vanguard that says it is targeting 10-year U.S. equity market returns of 4.7% to 6.7%, due to overhangs stemming from higher interest rates, inflation, and a possible recession.

Recession woes: Recession seems to be the key theme for investors to watch out, as the Fed’s rate hikes take effect completely. The International Monetary Fund (IMF)  expects global growth to slow to 2.7% next year, the weakest pace since 2001.

Energy may power through: Courtesy of cheap valuations and better earnings expectations, market participants are upbeat about the energy sector’s performance in 2023. An added element of uncertain geopolitical uncertainties is likely to keep oil prices elevated, and boost the sector overall.

Against the backdrop of a mixed outlook for 2023, you can shop for fundamentally strong stocks/sectors at cheaper valuations and back your long-term bets. As Charlie Munger puts it aptly, “If you’re going to invest in stocks for the longer term, there are going to be periods when there’s a lot of agony. I think you just have to learn to live through them.”